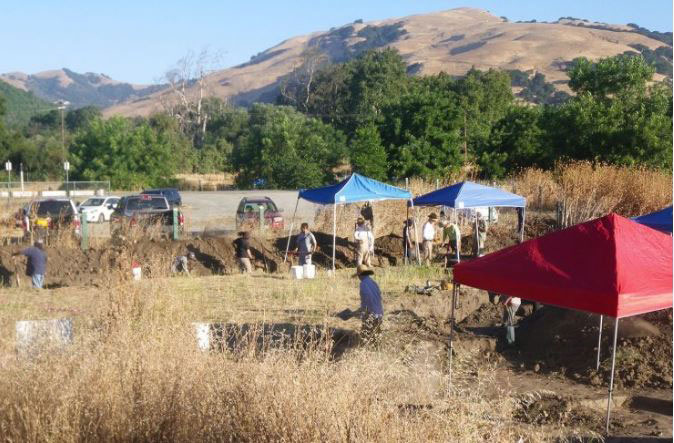 A new genetic comparison study between ancient people buried east of San Francisco Bay and modern members of California’s Muwekma Ohlone people supports the Tribe’s assertion – backed by family histories, government records and records from the Bay Area Spanish missions – that they and their ancestors have lived in this area longer than many archaeologists have estimated.

In 2014, the San Francisco Public Utilities Commission proposed the creation of an educational facility near the Water Temple in Sunol, California. When it was determined that the site would likely uncover human remains, the Muwekma Ohlone tribe was contacted. The Tribal Council requested a study of two settlement sites found on the land, which date as far back as 490 BCE, or more than 2,500 years ago.

The Tribe brought in the Far Western Anthropological Research Group, with archaeology principal investigator Brian F. Byrd, to direct the archaeological excavations, analysis and reporting as a collaborative endeavor with the Tribe, and University of Illinois Urbana-Champaign anthropology Professor Ripan Malhi to design a genomic project on any remains identified there. Researchers from Stanford University also joined the collaboration to analyze the genomic data.

“It’s a project with the participation of both researchers and tribal leadership from beginning to end,” said Noah Rosenberg, the Stanford Professor in Population Genetics and Society in the School of Humanities and Sciences and co-author of the paper.

The results of that genomic analysis, published March 21 in Proceedings of the National Academy of Sciences, reveal a thread that connects the ancient genomes and genomes from modern-day Muwekma Ohlone. This continuity affirms beliefs held by the Tribe but was somewhat surprising from the point of view of the researchers, given the impacts of European colonization and what is currently hypothesized about the diversity and movement of populations of people who have lived in and around California throughout this time.

One site, which the Tribe has named Síi Túupentak (Place of the Water Round House Site – named after the Sunol Water Temple), dates from between 1345-1850 CE and 76 individuals were buried there. The second site, called Rummey Ta Kuččuwiš Tiprectak (Place of the Stream of the Lagoon Site), dates back 490 BCE-1775 CE and contained burials for 29 individuals.

Stanford News spoke with three of the co-authors of this paper: Rosenberg, Alissa Severson and Alan Leventhal. Severson was a doctoral student in Rosenberg’s lab during this work and is lead author of the paper. Leventhal is an emeritus lecturer in the Department of Anthropology at San Jose State University and an ethnohistorian and archaeologist for the Muwekma Ohlone tribe.