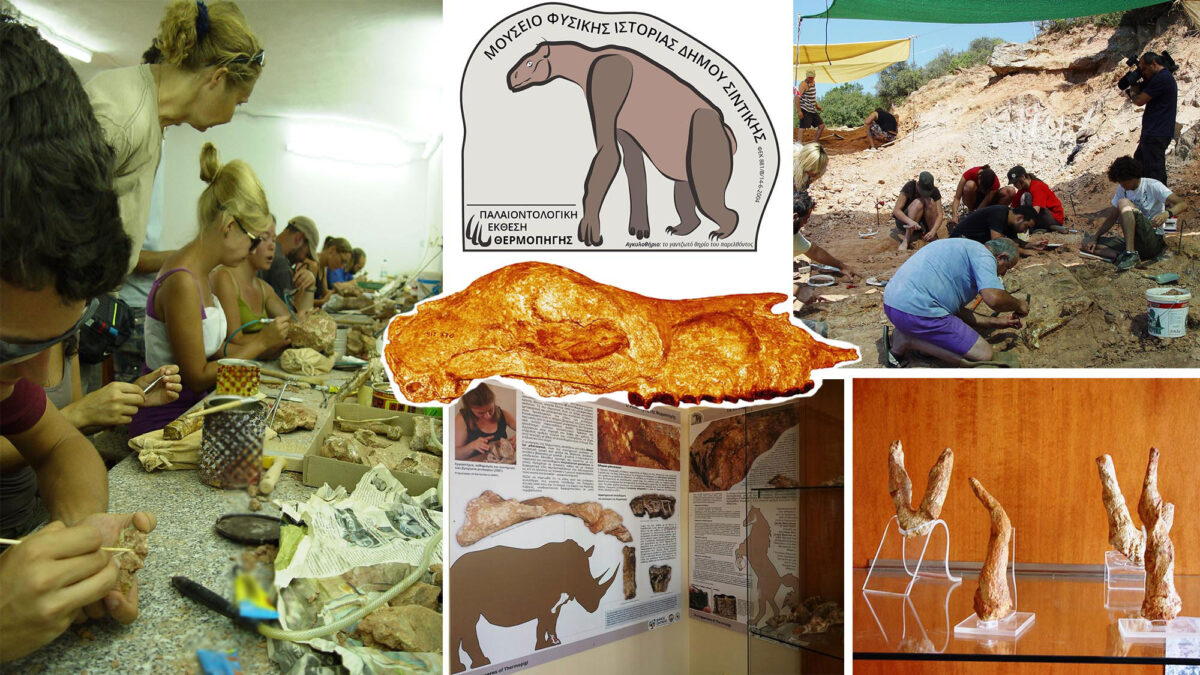 When the region was a savannah

Dinosaurs may never have lived in Greece and especially in eastern Macedonia, but 7,000,000 years ago there were ancylotherium, mastodon, giraffe, hipparion, gazelle, wild boar that along with machairodon, rhino and other prehistoric animals roamed free across a savannah in the region of today’s Sidirokastro, Serres and were the main fauna species.

If this description seems unbelievable today and certainly too distant, it is enough to visit the Natural History Museum of the Municipality of Sintiki and the Palaeontological Exhibition of Thermopigi housed in the former primary school, to make even a skeptic realize that the area is a center of important palaeontology research in Greece.

Although it is a small museum that started operating only in 2001 and was formally established in 2004, it is nevertheless a hive of valuable information about the prehistory of the area still unknown to most. And it might have remained in obscurity for many years  had not a completely random event, in the summer of 1997, led to the discovery of important fossils that were to shed light on the rich prehistoric life of central and eastern Macedonia.

It was at that time that railwayman George Tomboulidis noticed fossilized animal bones on a path in Pefkakia, Thermopigi. A year later, in 1998, he took a sample to the Aristotle University of Thessaloniki where he had a chance encounter with palaeontologist Dr. Evangelia Tsoukala and her subsequent study showed it was a prehistoric giraffe fossil of great scientific interest.

The importance of the ancylotherium fossil

Dr. Evangelia Tsoukala promptly visited the region with her associates and thanks to the then prefecture of Serres and the municipality of Sidirokastro, which provided the necessary resources, the first excavations began that brought to light an abundance of fossils.

Speaking to the Athens and Macedonia News Agency/AMNA, she says: “About 2,500 fossils were found, of which roughly 2,300 have been recorded. The museum exhibits a very limited number,while some are kept in cupboards the space being too small to accommodate everything. All found fossils are being studied but unfortunately, further palaeontological research and excavations have stopped. There is a lack of interest and resources from both the local government and the state and no plans to acknowledge the region’s prehistory to make it a tourist destination and a means of economic growth”.

As Ms. Tsoukala points out, the most important of all the findings so far is “the world’s best preserved ancylotherium skull. Ancylotheria are extinct perissodactyla (related to horses, rhinos and tapirs), which were herbivores, with curved hooves on the toes that formed “hooks”. An entire well preserved skull was found in the palaeontological excavation of 2002, making it possible to study anatomical features of the species, unknown until its discovery.

“This is a finding whose importance we have not yet fully understood”, says the professor of palaeontology. “As you may know, we never had dinosaurs in Greece. These lived 60,000,000 years ago, when the Greek region was still a seabed. But we did have ancylotheria that were impressive, two meter high prehistoric herbivores. We do not need dinosaurs to arouse the interest of the public and especially of children. We must and can support the development and promotion of palaeo fauna in Greece, which is particularly important”.

A savannah with plenty of water and a warm climate

Excavations conducted from 1998 to 2015 (with the Institute of Palaeontology of the University of Vienna assisting in the last three phases, 2011, 2013, 2015), identified the following in addition to the ancylotherium: hipparia (short horses with three toes in contrast to today’s ones that are taller and with one toe or hoof ), rhinos, mastodons (prehistoric elephants), giraffes, gazelles, antelopes, wild boars, large carnivores such as machairodons and hyenas between 5,000,000 and 7,000,000 years old.

“From studying the fossils”, notes Ms. Tsoukala, “general conclusions were drawn about the region’s palaeoenvironment and palaeoclimate. The landscape seems to have been open, a type of savannah, with a generally warm climate ranging from humid to dry. Certainly there was a lot of water and vegetation in the region because the larger animals (proboscis, rhinos, etc.), needed the former for their survival on a daily basis. For some reason, after their death and aided by the water, these animals were gathered in a cavity in the ground, covered with a suitable sediment, where in rare ideal conditions they were turned into fossils and thus preserved”.

Despite being unique, the palaeontological exhibition of Thermopigi is not visited as often as it deserves. However, as Petros Staikos head of the Natural History Museum of the Municipality of Sintiki, says to the AMNA “an effort is being made by the municipal company responsible for its operation to improve the infrastructure and make it better known. Apart from the fossil exhibition , the museum has also been enriched with donations from various collections of fossilized invertebrates, fish, plants and minerals from the area.”

The museum is currently recognized as a Regional Unit of the Museum of Geology-Palaeontology-Palaeoanthropology of the Aristotle University of Thessaloniki and in addition to its social contribution, is a laboratory for both research and educational purposes.