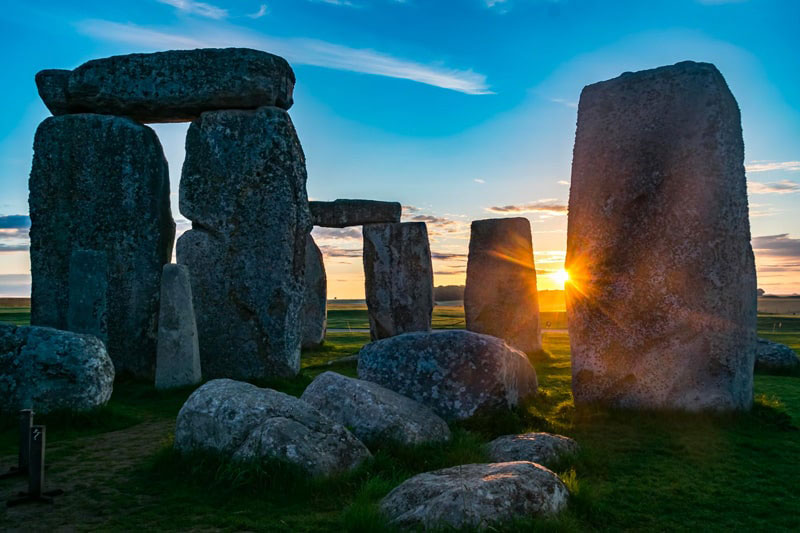 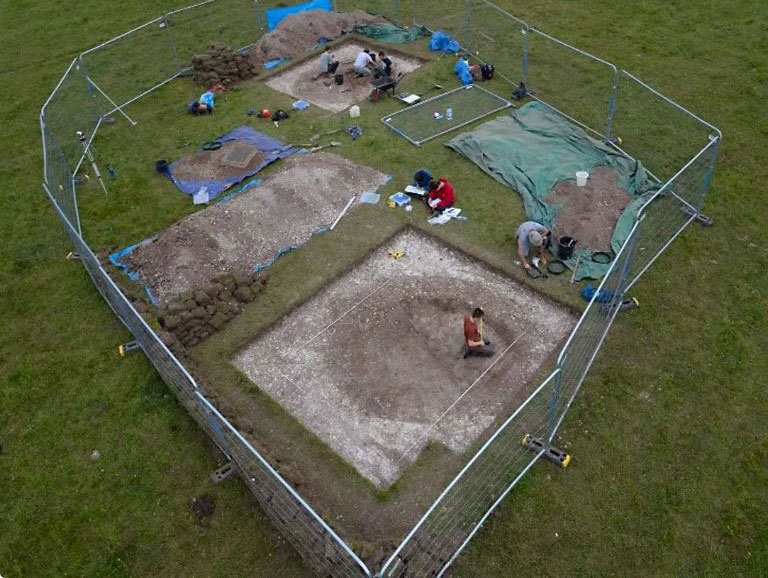 By geophysical sensors, excavations and computers

Researchers from the University of Birmingham and Ghent University (Belgium) have discovered hundreds of possible large prehistoric pits – and thousands of smaller ones – at the heart of the Stonehenge landscape, challenging our understanding of land use through time at the most intensively investigated prehistoric site in the world.

A large pit, over 4 metres wide and 2 metres deep dug into chalk bedrock, stands out as the most ancient trace of land use yet discovered at Stonehenge.

Over 10,000 years old, it bears witness to hunter-gatherers roaming the landscape during the early Mesolithic, when Britain was re-inhabited after last Ice Age. This is only one of many new sites and unexpected patterns of prehistoric activity detected at Stonehenge by the Ghent-Birmingham research team.

These results were achieved by combining – uniquely – the first extensive electromagnetic induction survey undertaken in the Stonehenge landscape with evidence from over 60 geoarchaeological boreholes, 20 targeted archaeological excavations, and computer-generated analyses of thousands of subsurface features, such as pits, revealed by the geophysical data.

Philippe De Smedt, Associate Professor at Ghent University said: “Geophysical survey allows us to visualize what’s buried below the surface of entire landscapes. The maps we create offer a high-resolution view of subsurface soil variation that can be targeted with unprecedented precision. Using this as a guide to sample the landscape, taking archaeological ‘biopsies’ of subsurface deposits, we were able to add archaeological meaning to the complex variations discovered in the landscape.” The combination of novel geophysics and ‘traditional’ archaeology has revealed otherwise elusive archaeological evidence around Stonehenge. From 2017, the team carried out excavations to evaluate just how accurate the results of the geophysical survey mapping and interpretation had been. These samples provided information for developing a model of types of archaeological evidence revealed in the geophysical data, resulting in computer-generated maps of traces of prehistoric activity.

“When used correctly, geophysical sensors do not ‘lie’. They represent a physical reality. Converting that observed reality to archaeological knowledge, however, is not a straightforward process. As archaeologists, we need information on aspects such as chronology and function as a basis for understanding past human behaviour. That puzzle contains pieces that can only be retrieved through excavation,” said Henry Chapman, Professor of Archaeology at the University of Birmingham.

A striking result of the project has been the identification of over 400 potential large pits (each over 2.5 metres in diameter), of which six were excavated in the course of the project, ranging in date from the Early Mesolithic (c. 8000 BCE) to the Middle Bronze Age (c. 1300 BCE).

While each of these sites adds to our knowledge of prehistoric activity in the Stonehenge landscape, the Mesolithic pit stands out as exceptional. The size and shape of the pit suggest it was probably dug as a hunting trap for large game such as aurochs, red deer and wild boar.

Dating to 8200-7800 BCE, it is not only one of the earliest of the very few Mesolithic sites near Stonehenge (predating, for instance, the Blick Mead occupation site 1.5 kms away), it is also the largest known Early Mesolithic pit feature in north-west Europe. 2/5 Mapping of the large pits also shows that they cluster in parts of the landscape that were repeatedly revisited over millennia, notably on the higher ground to the east and west of Stonehenge.

The social contexts of this activity changed radically over time, yet the spatial distribution of these pits suggest similar interests in locales that allowed extensive vistas overlooking the site of Stonehenge. The implications of this research for rethinking the spatial extents, temporalities and sensory qualities of diverse kinds of prehistoric behaviour beyond the obvious ceremonial monuments, are highly significant for understanding Stonehenge and its landscape setting.

Paul Garwood, Senior Lecturer in Prehistory at the University of Birmingham: “What we’re seeing is not a snapshot of one moment in time. The traces we see in our data span millennia, as indicated by the seven-thousand-year timeframe between the oldest and most recent prehistoric pits we’ve excavated. From early Holocene hunter-gatherers to later Bronze Age inhabitants of farms and field systems, the archaeology we’re detecting is the result of complex and ever-changing occupation of the landscape.”

While the Stonehenge landscape is unique, the research methods used are relevant to all archaeological environments. Sensor technologies and computer-based analysis are increasingly important aspects of archaeological research, providing new ways to explore ancient landscapes. At the same time, they must be integrated at every stage with evidence recovered by excavation to provide us with the rich cultural, environmental, and chronological information that we need to interpret our findings. As this project shows, these methods can radically change our understanding of ancient landscapes even in a setting as intensively investigated as that at Stonehenge. Much of the research and excavation for the project was carried out on land owned by the National Trust.

Dr Nick Snashall, Archaeologist for the Stonehenge & Avebury World Heritage Site, said: “By combining new geophysical survey techniques with coring, and pin point excavation, the team has revealed some of the earliest evidence of human activity yet unearthed in the Stonehenge landscape. The discovery of the largest known Early Mesolithic pit in north-west Europe shows that this was a special place for hunter-gatherer communities thousands of years before the first stones were erected.”