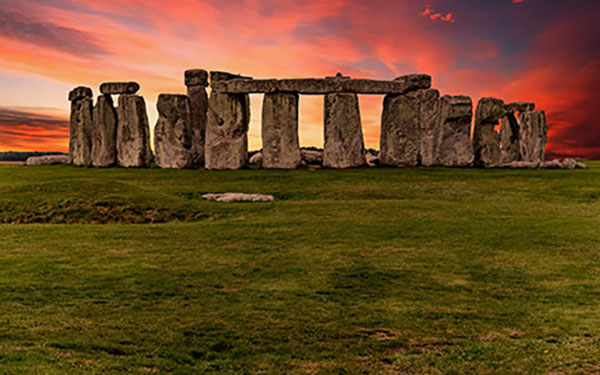 Four thousand years before Stonehenge was constructed, land within the World Heritage Site was covered by open woodland, with meadow-like clearings, inhabited by grazing animals and hunter-gatherers, according to new research by the University of Southampton.

Scientists exploring Blick Mead, a Mesolithic archaeological site within a chalkland spring area about a mile from the iconic standing-stones, have found evidence the land was not covered in dense, closed canopy forests during the later Mesolithic period, as had previously been thought. Rather, it was partially wooded and populated by aurochs (cattle), red deer, elk and wild boar – making it good hunting ground for humans who lived opportunistically off the land, prior to the arrival of early farmers.

Lead researcher, Samuel Hudson, of Geography and Environmental Science at Southampton explains: “There has been intensive study of the Bronze Age and Neolithic history of the Stonehenge landscape, but less is known about earlier periods. The integration of evidence recovered from previous excavations at Blick Mead, coupled with our own fieldwork, allowed us to understand more about the flora and fauna of the landscape prior to construction of the later world-famous monument complex.

“Past theories suggest the area was thickly wooded and cleared in later periods for farming and monument building. However, our research points to pre-Neolithic, hunting-gatherer inhabitants, living in open woodland which supported aurochs and other grazing herbivores.”

The research team analysed pollen, fungal spores and traces of DNA preserved in ancient sediment (sedaDNA), combined with optically stimulated luminescence (OSL) and radiocarbon dating to produce an environmental history of the site. Using this evidence, they built a picture of the habitat in the area from the later Mesolithic (5500 BC) to the Neolithic period (from 4,000 BC).

The study indicates that later Mesolithic populations at Blick Mead took advantage of more open conditions to repeatedly exploit groups of large ungulates (hoofed mammals), until a transition to farmers and monument-builders took place. In a sense, the land was pre-adapted for the later large-scale monument building, as it did not require clearance of woodland, due to the presence of these pre-existing open habitats. The researchers suggest there was continuity between the inhabitants of the two eras, who utilised the land in different ways, but understood it to be a favourable location.

The findings of the team from Southampton, working with colleagues at the universities of Buckingham, Tromsø and Salzburg, are published in the journal PLOS ONE.

The scientists plan further exploration of the Mesolithic history of this area, which they hope to begin at the end of this year.