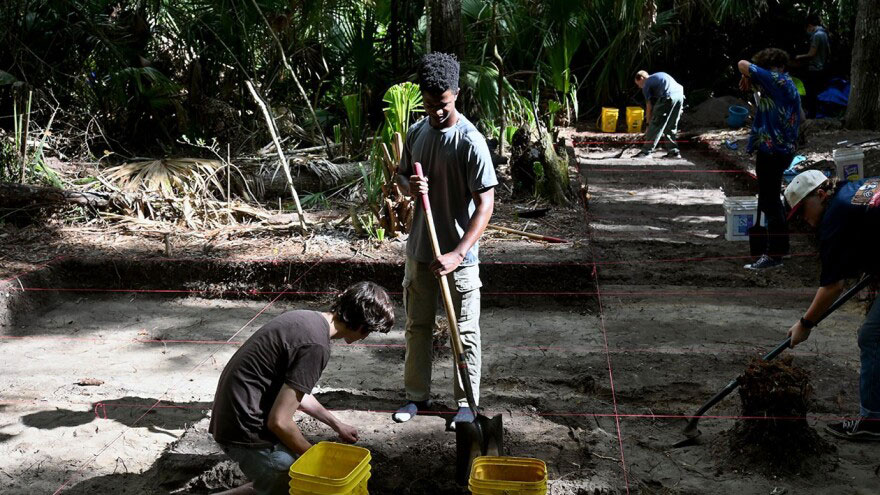 The University of North Florida archaeology team believes it may have located the lost Indigenous Northeast Florida community of Sarabay.

UNF students have uncovered pottery, shells, arrow heads, charcoal, bones and other craft objects at a dig site on Big Talbot Island, said Keith Ashley, UNF’s Archaeology Lab Director. Ashley has over 30 years of archaeology experience in the Northeastern United States. The location of the site matches where Sarabay’s location was described in French and Spanish documents dating to the 1560s, he said.

The site is part of UNF’s 20-year-old Mocama Archaeological Project. It focuses on the Mocama-speaking Timucua Indians, one of the first indigenous populations encountered by European explorers in the 1560s, Ashley said.

He said their find has helped them understand more about the life of the people who lived there.

“A lot of their history isn’t in textbooks,” Ashley said. “We’re really trying to understand the daily rhythms of life, what they’re doing on a day to day basis,”

Some found artifacts indicate there may have been interaction between the indigenous people and Europeans, Ashley said. Over 60 pieces of Spanish pottery have been found. Some fragments of Native American pottery were found that had some European influence.

Ashley hopes to confirm they have found Sarabay by finding evidence of houses and public architecture. Since structures of the time were made of thatch and wood, the only evidence of them would be stained soil and charcoal from fire pits.

“That’s gonna be kind of like the proverbial needle in the haystack,” Ashley said.

The dig has been worked on by UNF students who take Ashley’s class, Archaeological Field Methods. Students who take the class work at the site for 30 hours a week for six weeks during the summer.

On Tuesday, dozens of students were at the site. In three separate locations, some students were carefully shoveling dirt into buckets. Others were taking the filled buckets and sifting their contents for artifacts. A handful of students stood with clipboards, jotting down where each artifact was found and how deep it was to catalog it.

That morning, one student found the front end of a ceramic smoking pipe, to the others’ amazement and amusement.

“Damn, they were blazing it,” said a student.

On the edge of the dig site, three students targeted a shell midden, which was where indigenous people would deposit their waste.

McKenna Lenoir, one of the students working the shell midden, said they were examining it to help date the site. Calcium in deposited shells can preserve bones that were also thrown into the pile, which can then be dated, she said.

She said working on the site has given her invaluable hands-on experience.

“I feel like I’ve learned more in the short time out here than any class ever,” she said.

Ashley said this dig could not have been possible without the work of his students.

“Sometimes I get to be the mouthpiece, but it’s really UNF students who really come out here and dedicate their time and work really, really hard,” he said. “ I just owe them so much.”