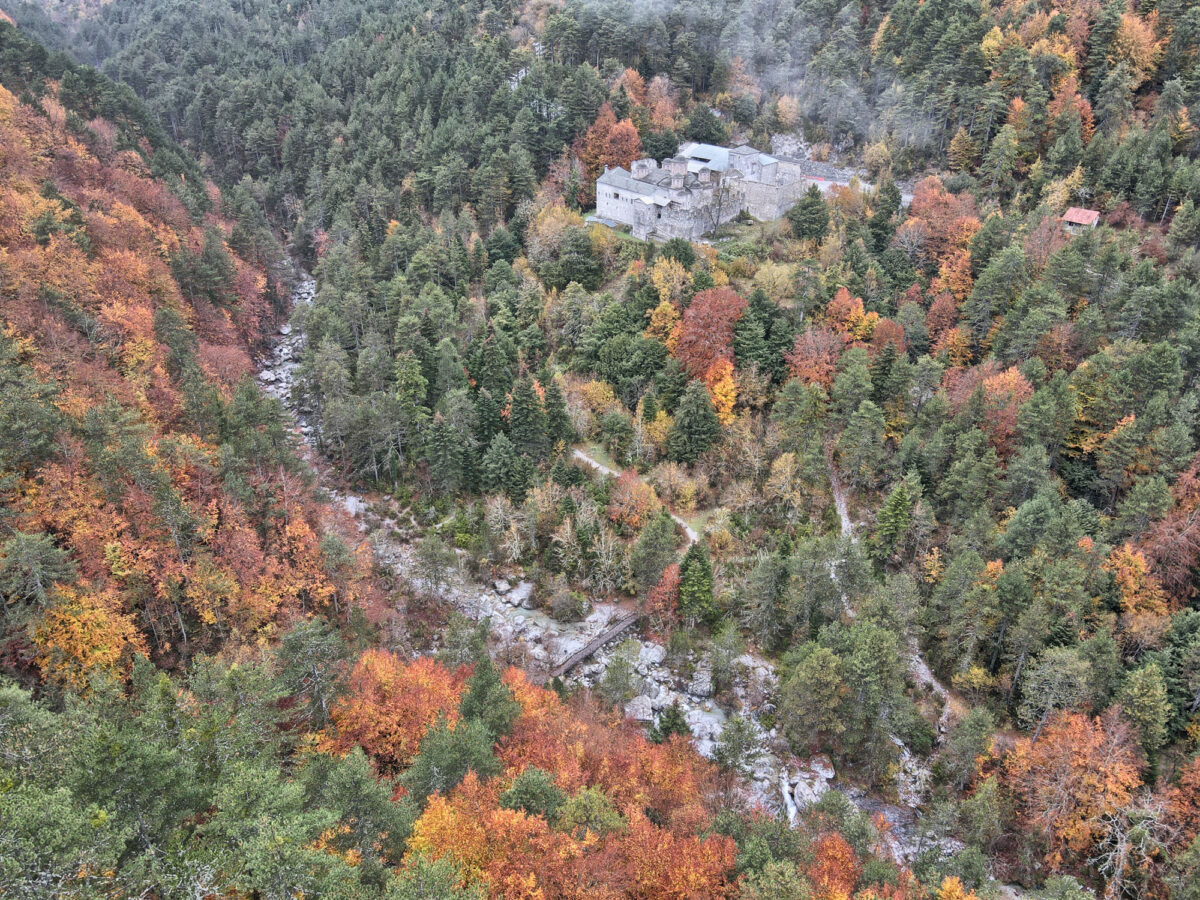 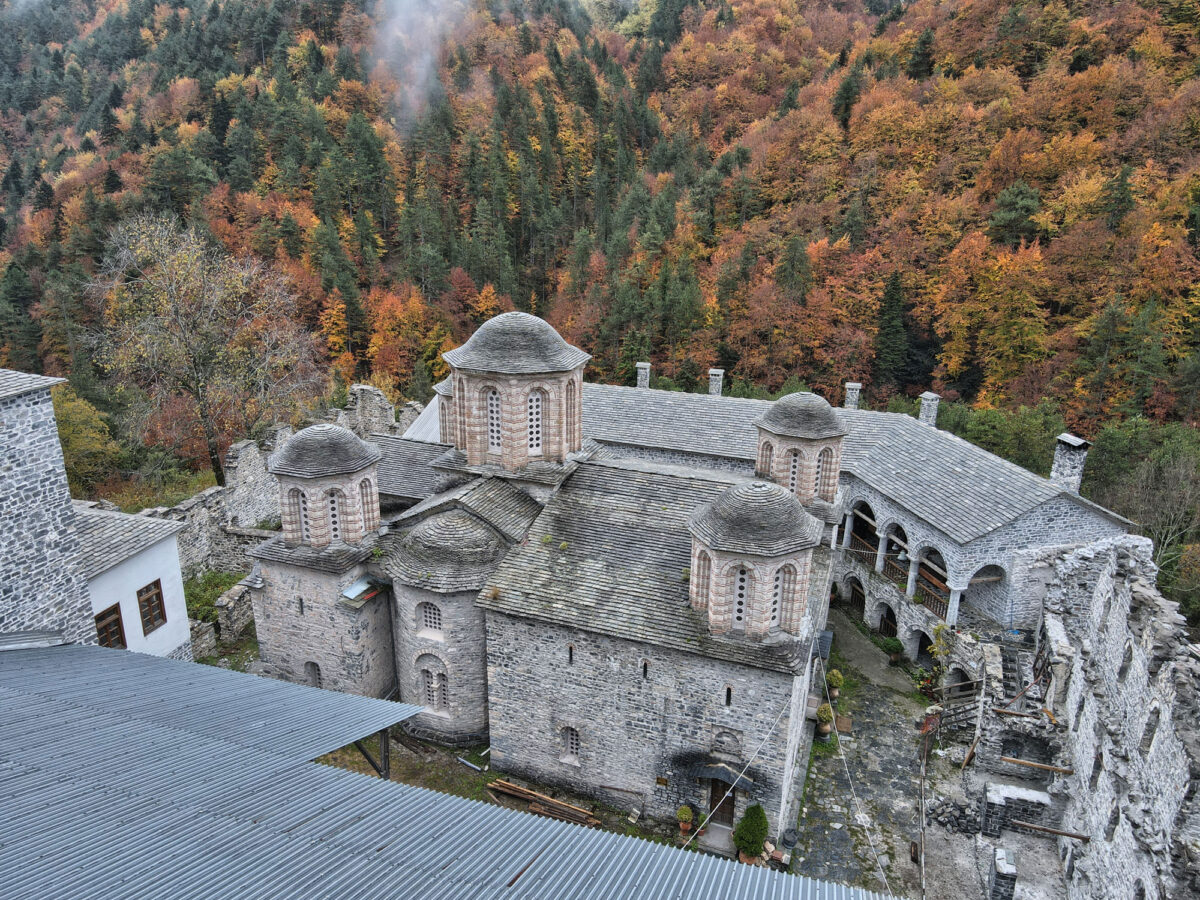 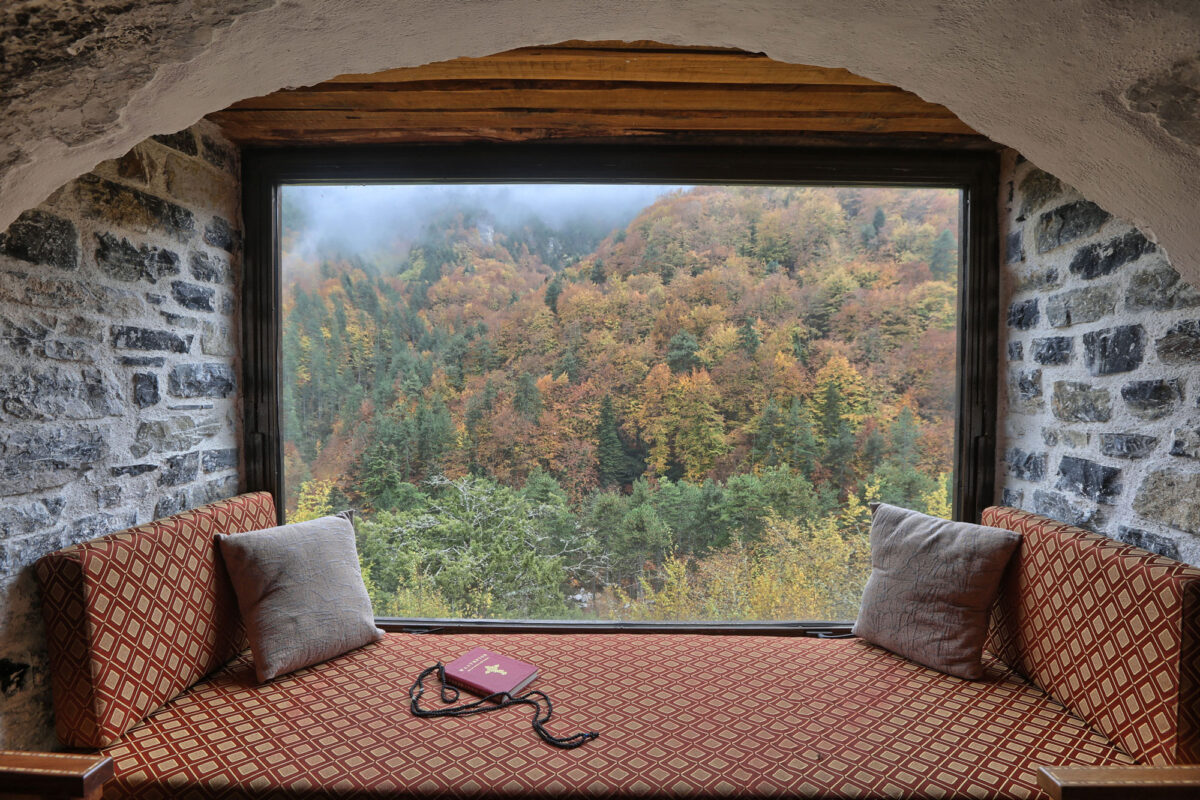 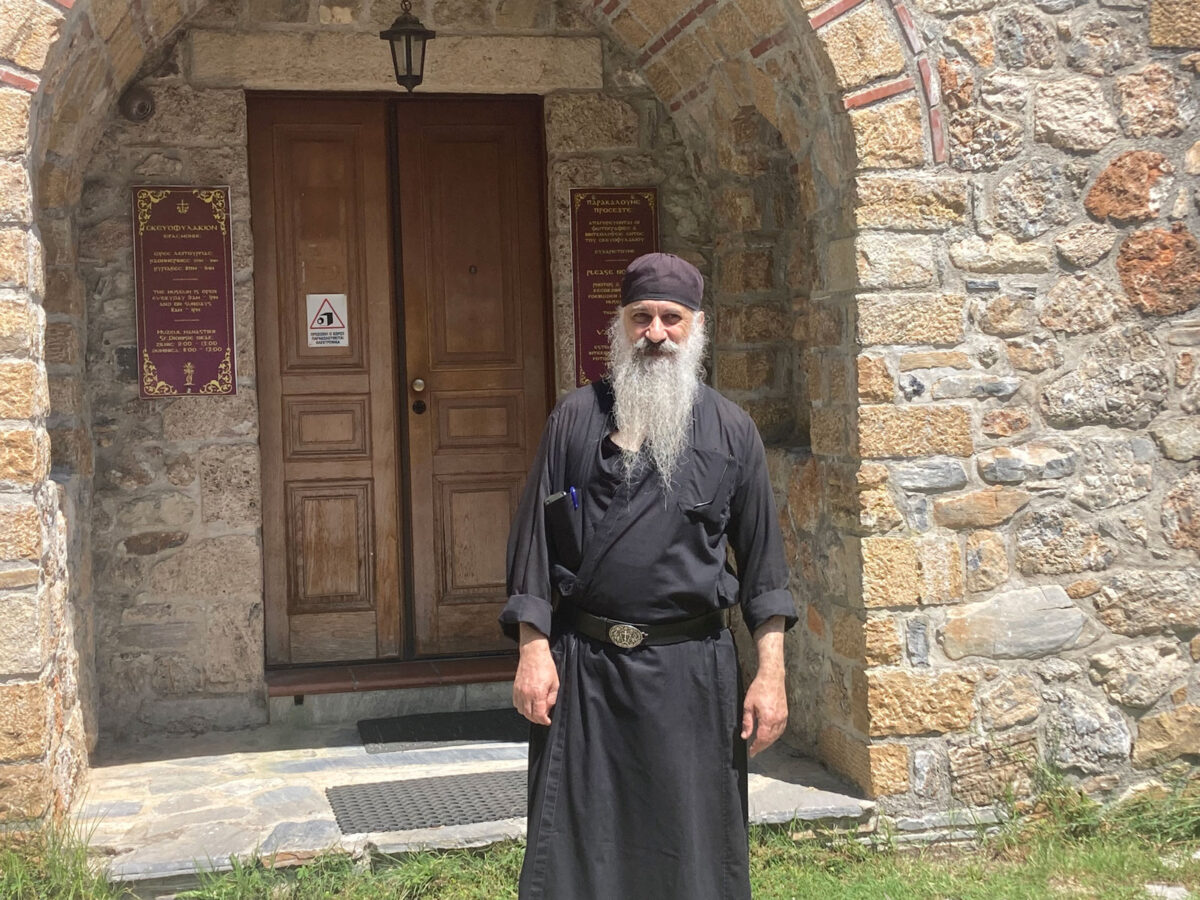 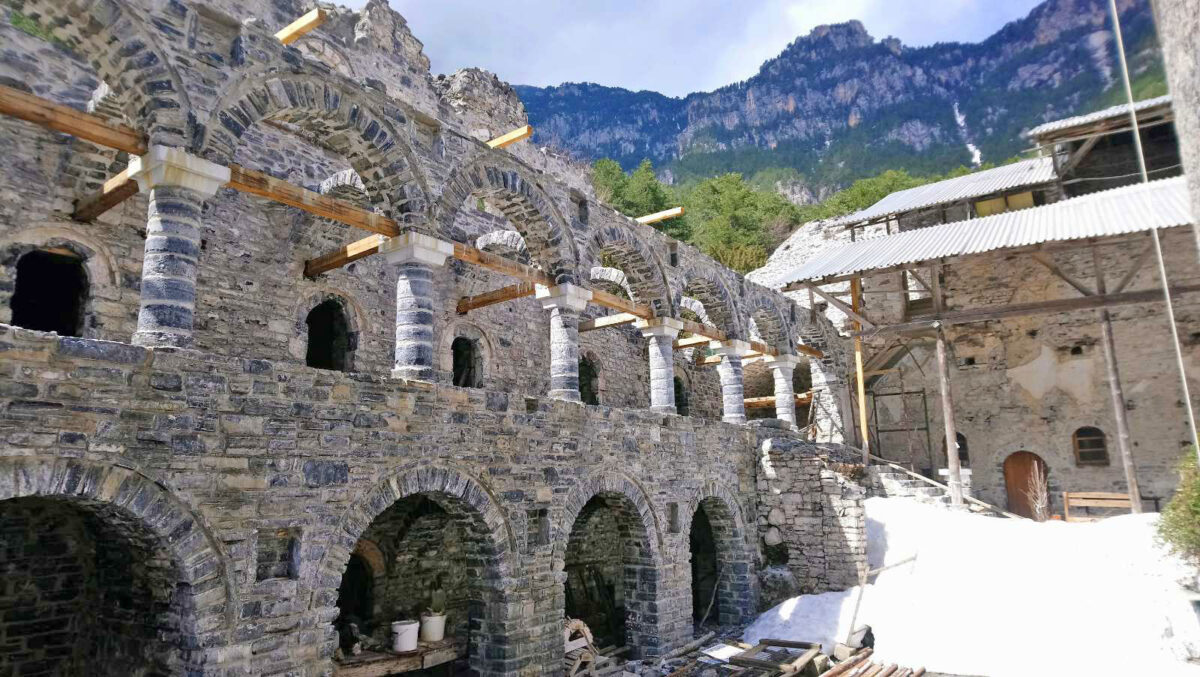 Guided by a forgotten photograph, a damaged monastery is being restored

The Old Monastery of Agios Dionysios in Olympus

The restoration works of the destroyed Old Monastery of Agios Dionysios in Olympus, inside the Enipeas gorge at an altitude of 850 meters, are continuing at a steady pace under the watchful eye of the monks. One or two monks are constantly present among the ruins supervising the works, while every Saturday a church service is held by Father Ephraim.

The stay there lasts from Easter until the end of October, weather conditions permitting. It is difficult to spend the winter in the monastery, as there is no electricity and therefore no heating. The old monastery, founded in 1542, was initially set on fire in 1828 by the Turks, resulting in the loss of a significant part of its relics, while in 1943 it was blown up by German troops.

This last catastrophic attack resulted in the monks moving to the current Holy Monastery of Agios Dionysios, just three kilometers from Litochoro. One of the monks who often leaves Metochi to go to the ruins of the “damaged” monastery is Father Amfilochios, who told journalists on a press visit to Pieria the history of the old monastery and the wonderful way the monks managed to “unblock” the restoration work  for it to go ahead..

“The old monastery was blown up by the Germans  through a rumour that it was allegedly hiding guerrillas, which had never happened”, said Father Amfilochios, explaining that the first German attempt to destroy the monastery was made from the air: “First the Germans tried to bomb the monastery by plane. We have the testimony of the pilot who flew it. He  did not succeed and he considered it to be a miracle. As he said, as soon as he took off, a fog covered the monastery so he could not locate it so as  to bomb it”.

The Germans, however were  insistant. They sent explosives with animals and managed to  encircle the monastery with quantities of dynamite and blow it up from the foundations in 1943. With its destruction, the monastery’s community – which was saved at the last moment taking with it only one  icon – went down to the Metochi. Years went by, but the monks did not forget their old home and took it upon themselves to restore it, based mainly on testimonies about the architecture of the monastery. It was only at some point in this entire project that there was great difficulty for the work to proceed properly, as the monks did not know how the monastery’s two wings could be joined, since their corners had been completely destroyed by the explosives and were on different levels.

“The civil engineer was also having a hard time because the restoration had to be done exactly. One week after this problem had come up, we received an envelope with some photos taken by a German soldier, who was in the group of those carrying the explosives to blow up the monastery. Shortly before the disaster, he had picked up his camera and captured the place exactly as it was before being destroyed. In fact, he sent us a photo that showed exactly what the corner of the monastery that needed restoration was like”, adds the monk Amfilochios.

The works, which have been in progress for several years now, are made with the same materials used at that time in the construction of this post-Byzantine monument. “The restoration is being done with the materials of that period ; even in the case of the composition of the mortar, which had seven types,  including theraic/ volcanic earth /.a traditional mortar The half-destroyed walls that have existed since then, from 1943 until today, have been eaten away by rain, snow and hail but the mortar has not crumbled”, the monk points out.

The restoration on the south side has been completed, where cells have been preserved and small vaulted spaces with a low entrance. This year, work will continue on the west wing where the monks’ cells were located, leaving the north side to be restored, where the refectory and kitchen were housed.