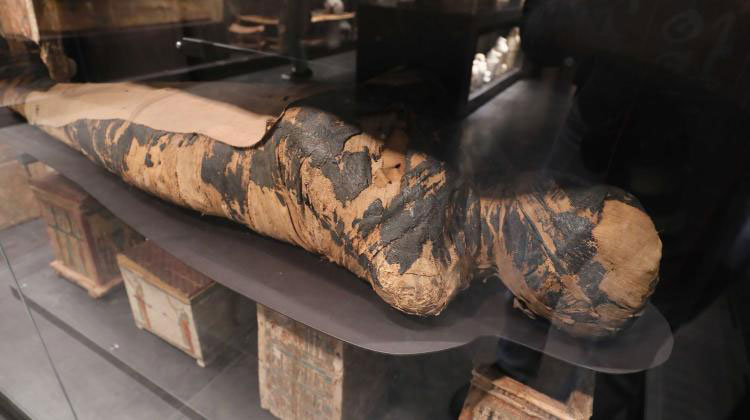 At The National Museum in Warsaw

Extensive facial skeleton defects of a 2,000-year-old Egyptian mummy may indicate that she suffered from nasopharyngeal cancer, says Marzena Ożarek-Szilke palaeontologist from interdisciplinary Warsaw Mummy Project and from the Department of Oncology at the Medical University of Warsaw.

Professor Rafał Stec from the Department of Oncology at the Medical University of Warsaw said: “Firstly, we have unusual changes in the nasopharyngeal bones, which, according to the mummy experts, are not typical of the mummification process.

“Secondly, the opinions of radiologists based on computed tomography indicate the possibility of tumour changes in the bones.”

He added that the young age of the deceased and the lack of another cause of death indicate an ‘oncological cause’ with a high probability.

“For now a malignant tumour is suspected, and the only certain diagnosis is possible after a histopathological examination, which would give a 100 percent certainty,” he said.

The mummy researchers now plan to collect tissue samples and compare them with cancer samples from other Egyptian mummies stored in tissue banks in the US and the UK.

Cancer in ancient Egypt was not rare and there are several known cases of confirmed nasopharyngeal cancer.

According to the researchers, the mummy analysis can contribute to the development of modern medicine by revealing the ‘molecular signature’ of cancer that can be compared with currently occurring cancers.

It is hoped that this will also expand the knowledge of cancer evolution and may indicate further research directions in both diagnostics and treatment.

Planned further research will determine the cause of the disease – whether it was associated with virus infection, e.g. HPV, or had a genetic background.

Genetic analysis of the collected tissues will be performed by Professor Tomasz Stokłosa from the Department of Cancer Biology and Genetics of the Medical University of Warsaw. The research will take several months, and the results may be available at the end of this year.

A recent study determined that it was a mummy of woman.

In 2021, the researchers reported that the mummified woman had been pregnant.

Since 1917, the mummy, belonging to the University of Warsaw, is loaned to the National Museum in Warsaw. It is displayed together with the sarcophagus at the permanent exhibition of the Ancient Art Gallery.