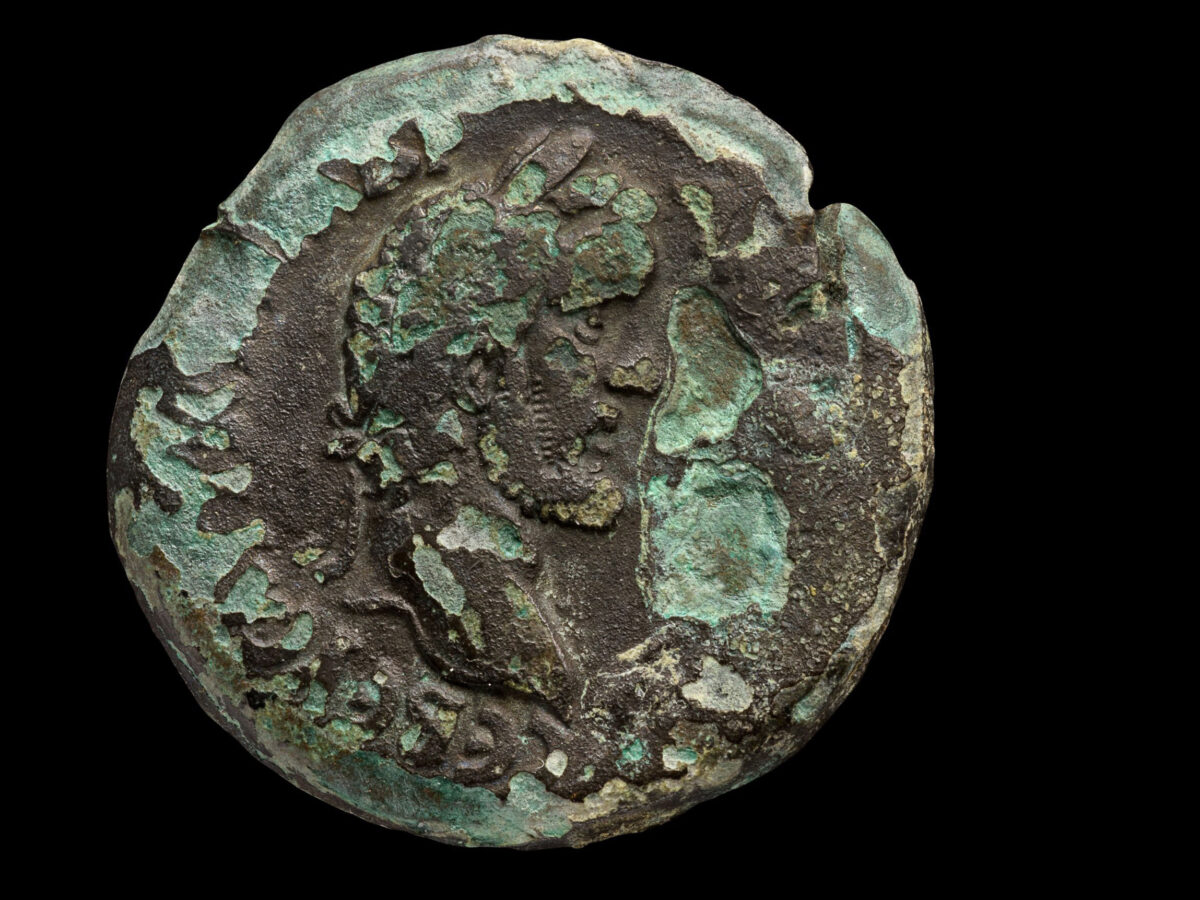 Discovered off the Carmel coast

An exceptionally well-preserved spectacular rare bronze coin was recently recovered from the seabed during an underwater archaeological survey conducted by the Israel Antiquities Authority off the Carmel coast at Haifa.
The coin was minted under the emperor Antoninus Pius (138–161 CE) in Alexandria, Egypt. The reverse depicts the zodiac sign Cancer beneath a portrait of the moon goddess Luna. The coin bears the date ‘Year eight,’ the eighth year of Antoninus Pius’s rule, or 144/145 CE. It belongs to a series of thirteen coins, twelve depicting the different signs of the zodiac and another the complete zodiac wheel.”

According to Israel Antiquities Authority Maritime Archaeology Unit director Jacob Sharvit, “This is the first time such a coin has been discovered off Israel’s coast, and it is a rare addition to the National Treasures collection. Israel’s Mediterranean shores and waters have yielded many archaeological sites and finds that attest to connections in antiquity between Mediterranean ports and the countries along it. These finds, which were lost at sea and disappeared from sight for hundreds and thousands of years, have been remarkably well preserved; some are extremely rare and their discovery completes parts of the historical puzzle of the country’s past.”

The coin was discovered during a survey conducted by the Israel Antiquities Authority to locate, document, research, and preserve antiquities sites and ancient finds—cultural assets that are endangered by accelerated marine development.

According to Israel Antiquities Authority’s Director, Eli Eskosido, “In the last decade, the State of Israel has changed its perception of the sea. Rather than marking the country’s border, the sea is now recognized as an integral part of its cultural heritage, in addition to security considerations and strategic and economic concerns. Israel’s territorial waters contain natural resources and cultural assets that must be explored and protected in light of different interests and potential development. The maritime survey off Haifa is part of this process. The rare coin recovered during the survey is a vivid reminder of the importance of the survey.”

Interestingly, the ruler who minted the coin, Antoninus Pius, was a Roman emperor whole ruled between 138 and 161 CE. Unlike his predecessors, he was not a military man and never participated in battle. His reign was the quietest during the whole of the Roman Empire and marked the height of the period of ‘Roman peace’ (Pax Romana) throughout the empire. Antoninus had a different approach to running the Roman Empire, preferring to deal with any foreign crises through provincial governors; in fact, he never left Rome himself. He encouraged and initiated the construction of temples, theaters, and magnificent mausoleums and promoted science and philosophy.

During his rule, the empire’s relations with the Jews were greatly improved, the decrees of Hadrian were revoked, and Jews were allowed to practice circumcision. These steps led to amicable relations between the emperor and Rabbi Yehuda ha-Nasi.