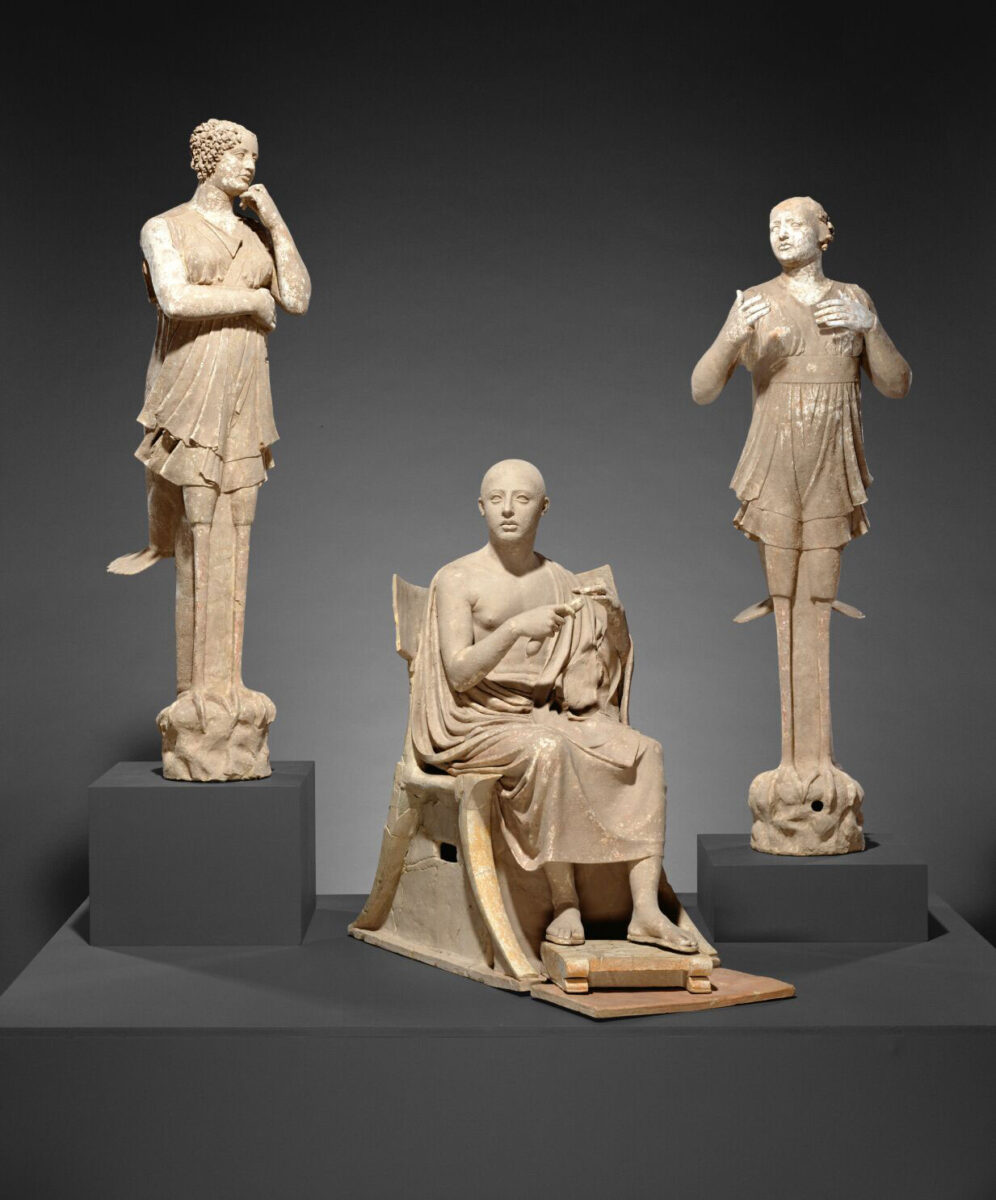 Manhattan District Attorney Alvin L. Bragg, Jr., announced the return of the “Poets and Sirens,” a group of terracotta sculptures representing a seated poet and two sirens, valued at more than $8 million. The seizure of the Poets and Sirens arose from an ongoing criminal investigation in New York that found the sculptures had been stolen from a tomb near Taranto, Italy, were smuggled and laundered by known trafficker Giovanni Franco Becchina, and eventually sold to the J. Paul Getty Museum in Los Angeles. After being presented with some of the evidence developed by the Manhattan District Attorney’s Office as part of its ongoing criminal investigation, the Getty consented to their repatriation.

The Poets and Sirens were formally repatriated to Italy today at the Getty Museum by Assistant District Attorney Matthew Bogdanos and Special Agent Robert Mancene from Homeland Security Investigations to General Roberto Riccardi, Commander of the Carabinieri’s Command for the Protection of Cultural Heritage (TPC), Warrant Officer Angelo Ragusa, and Silvia Chiave, Los Angeles-based Consul General for the Republic of Italy.

“Like so many other trafficked antiquities, the Poet and Sirens were ripped away from an archaeological site in their home country,” said District Attorney Bragg. “Thanks to the work of our prosecutors and analysts, along with our law enforcement partners at Homeland Security Investigations, we uncovered this decades-old theft and are finally able to send these statues back to Italy where they belong.”

General Roberto Riccardi, Commander of the Carabinieri TPC said, “The return of this wonderful group of sculptures enriches the Italian cultural heritage and represents the result of an effective cooperation between the Antiquities Trafficking Unit run by Colonel Matthew Bogdanos, HSI, and the Archeology Section of the Italian Carabinieri for the Protection of Cultural Property. I thank them all for their commitment and hard work.”

“Sculpted centuries before the assassination of Julius Caesar, the Poet and Sirens is an ancient and remarkable piece of history that today, we have the privilege to return to the people of Italy.  Today’s repatriation is another example showcasing the extraordinary coordination between HSI New York, the Manhattan District Attorney’s Office and our international partners in the Italian government to track down lost and looted pieces of cultural history.  This successful multi-jurisdictional investigation has returned the Poet and Sirens home to the people of Italy – where it will be preserved for generations to come,” said Homeland Security Investigations (HSI) New York Acting Special Agent in Charge Ricky J. Patel.

An investigation by the Manhattan District Attorney’s Office found that known traffickers Raffaele Monticelli and Giovanni Franco Becchina purchased the Poet and Sirens just days after the sculpture group was stolen by local looters from a tomb near Taranto, Italy. At the time of their looting, the sculptures were found in hundreds of dirt-encrusted fragments.

The looting of the Poets and Sirens followed the general method of Giovanni Franco Becchina and Raffaele Monticelli, who used local looters to raid insufficiently guarded archaeological sites throughout Italy, trafficked those stolen antiquities through Europe, and ultimately offered the stolen antiquities for sale in New York. Here, after smuggling the fragments from Italy into Switzerland, Becchina and Monticelli paid for the Poet and Sirens to be restored and then offered the group for sale. In 1976, Leo Mildenberg, an antiquities collector at the Swiss Bank Leu, helped to launder the pieces and brokered a sale between Becchina and the J. Paul Getty Museum. Mildenberg frequently brokered deals for both Becchina and Monticelli.