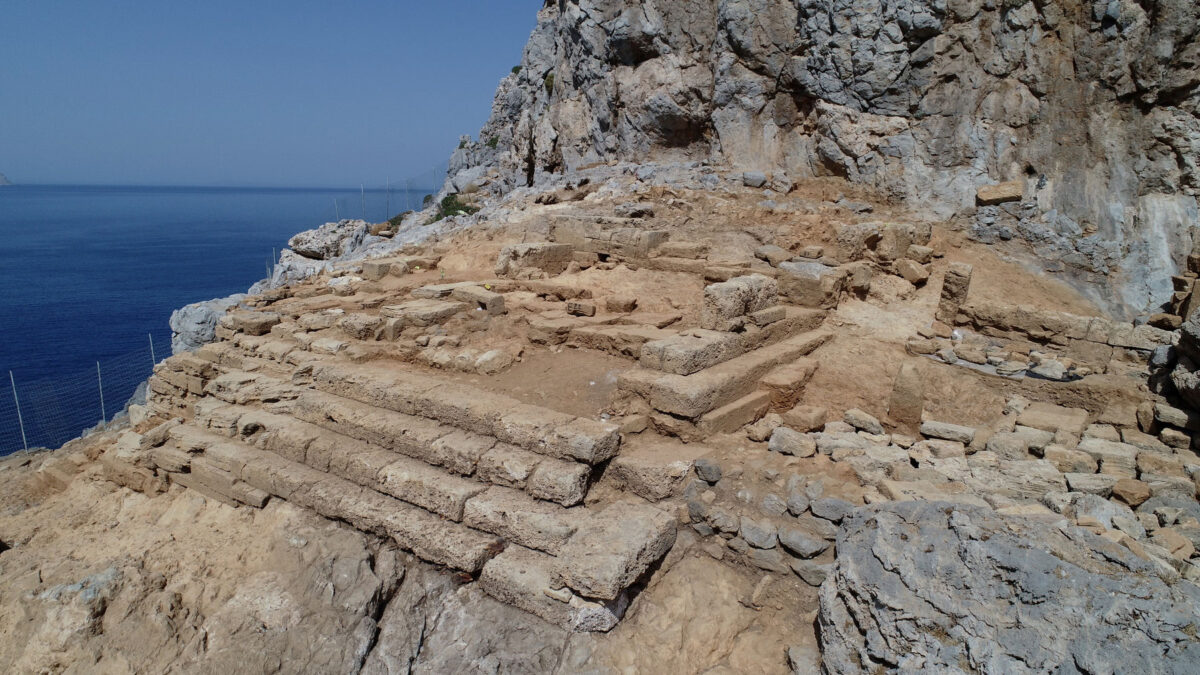 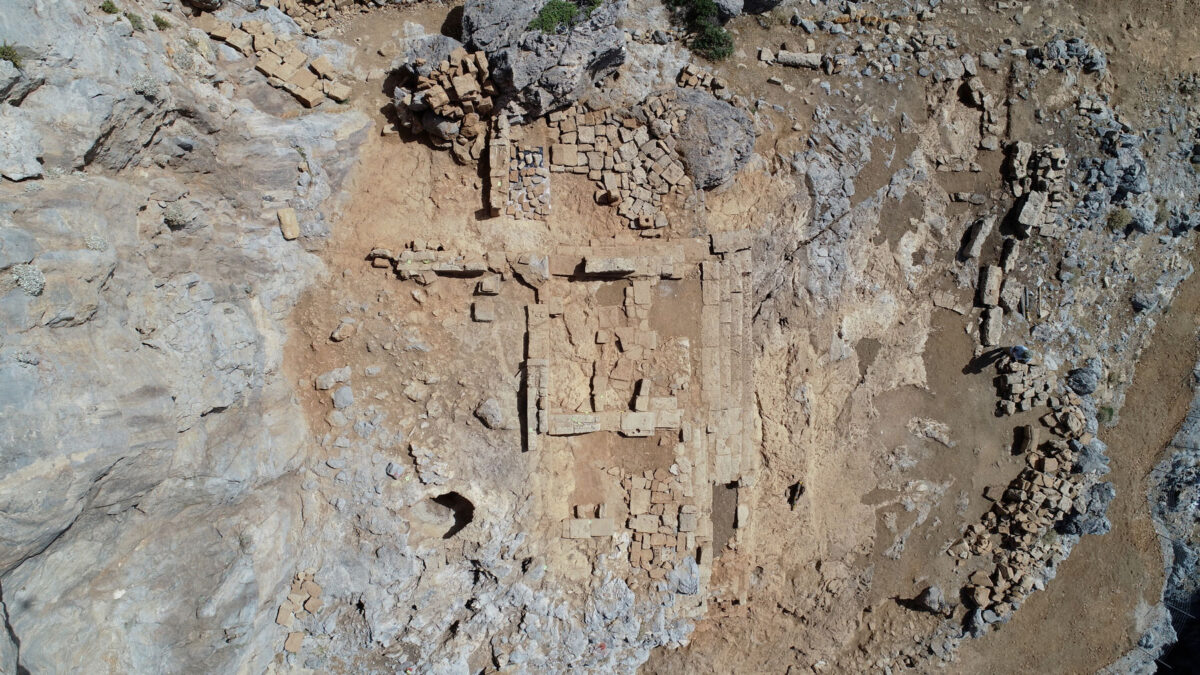 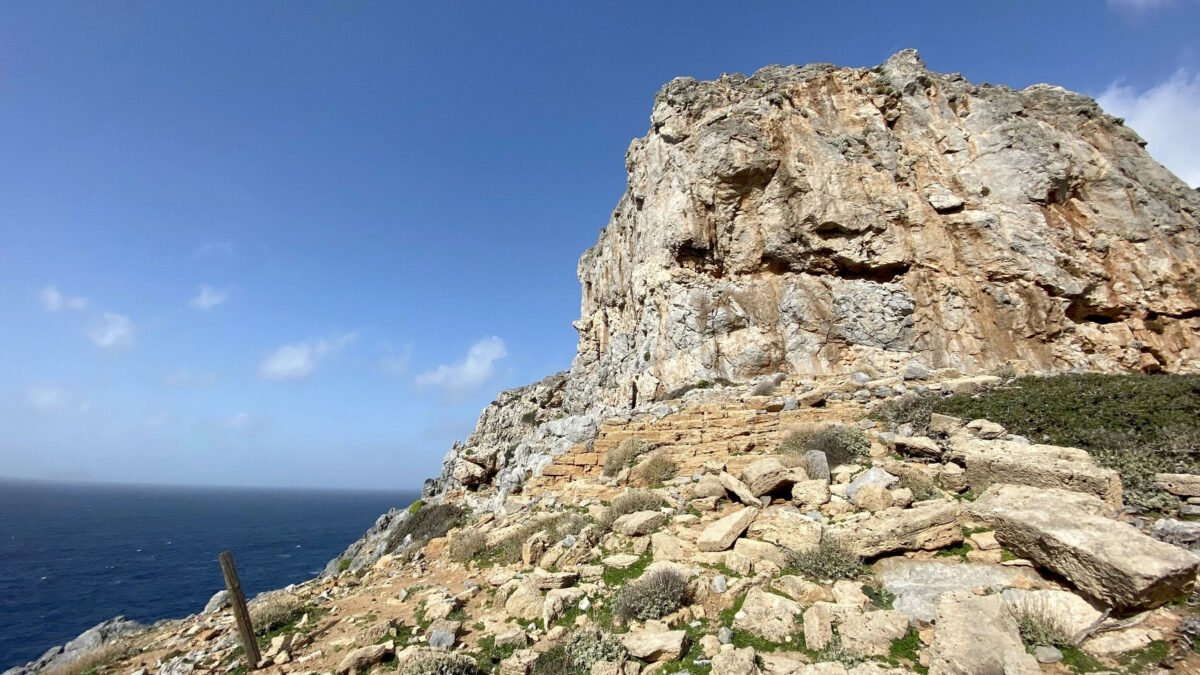 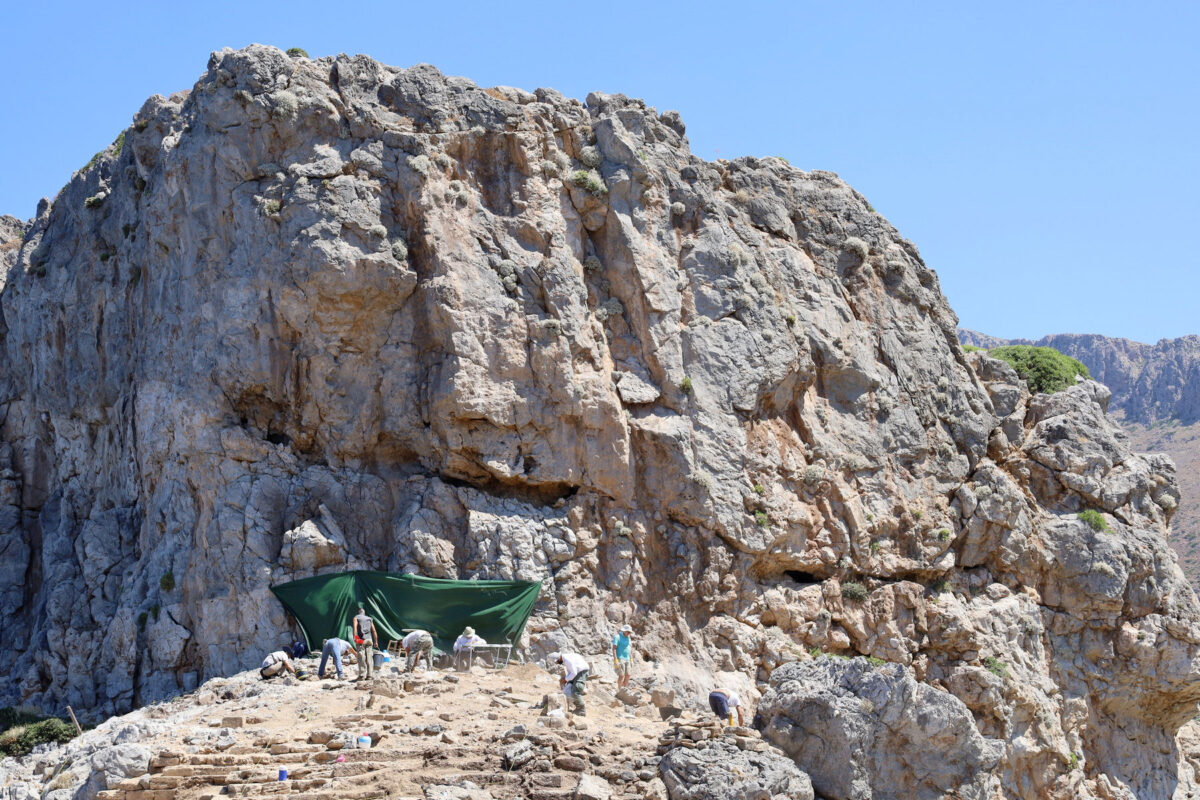 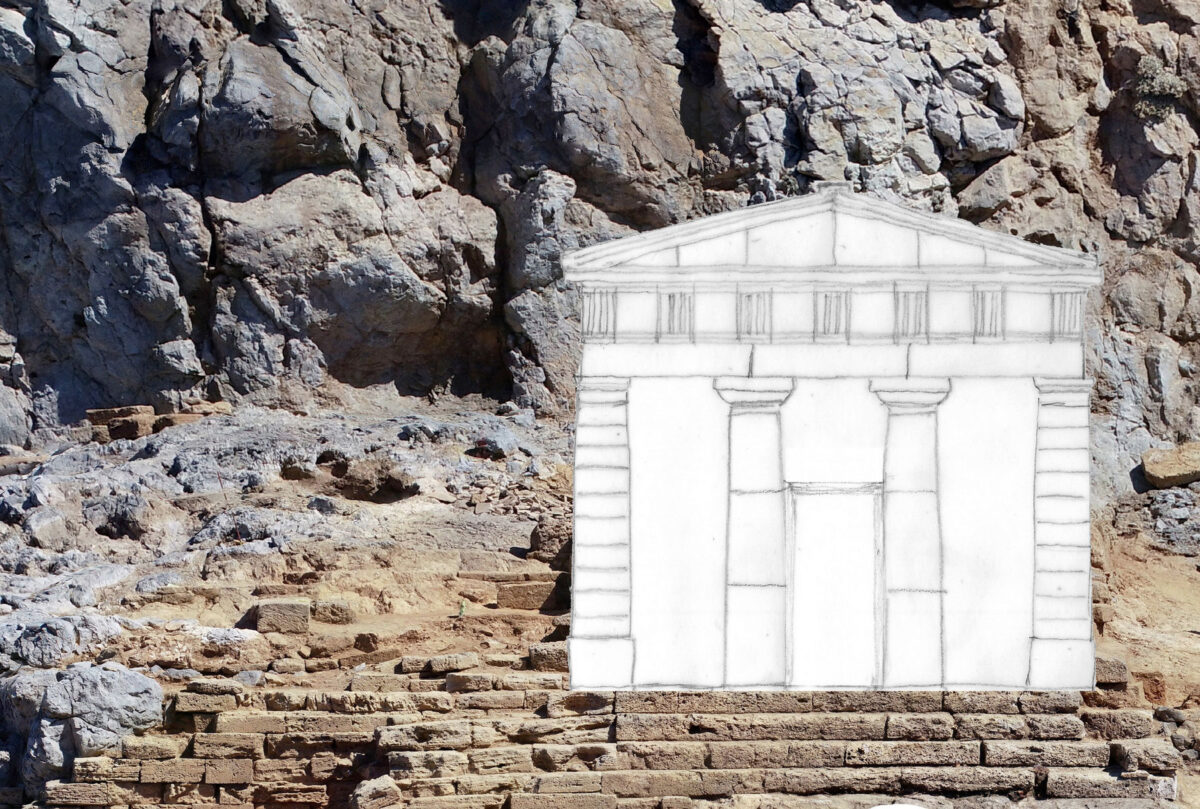 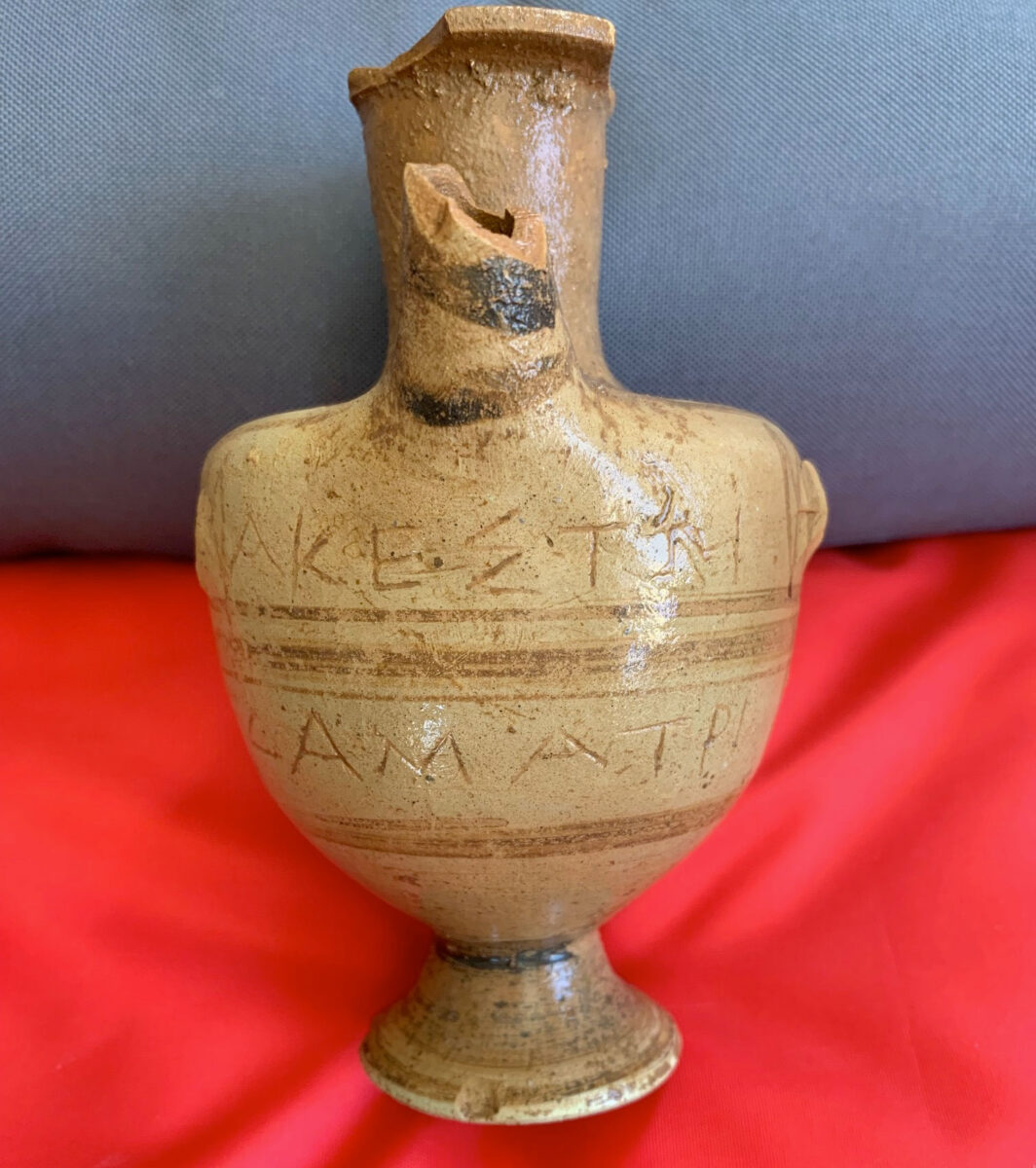 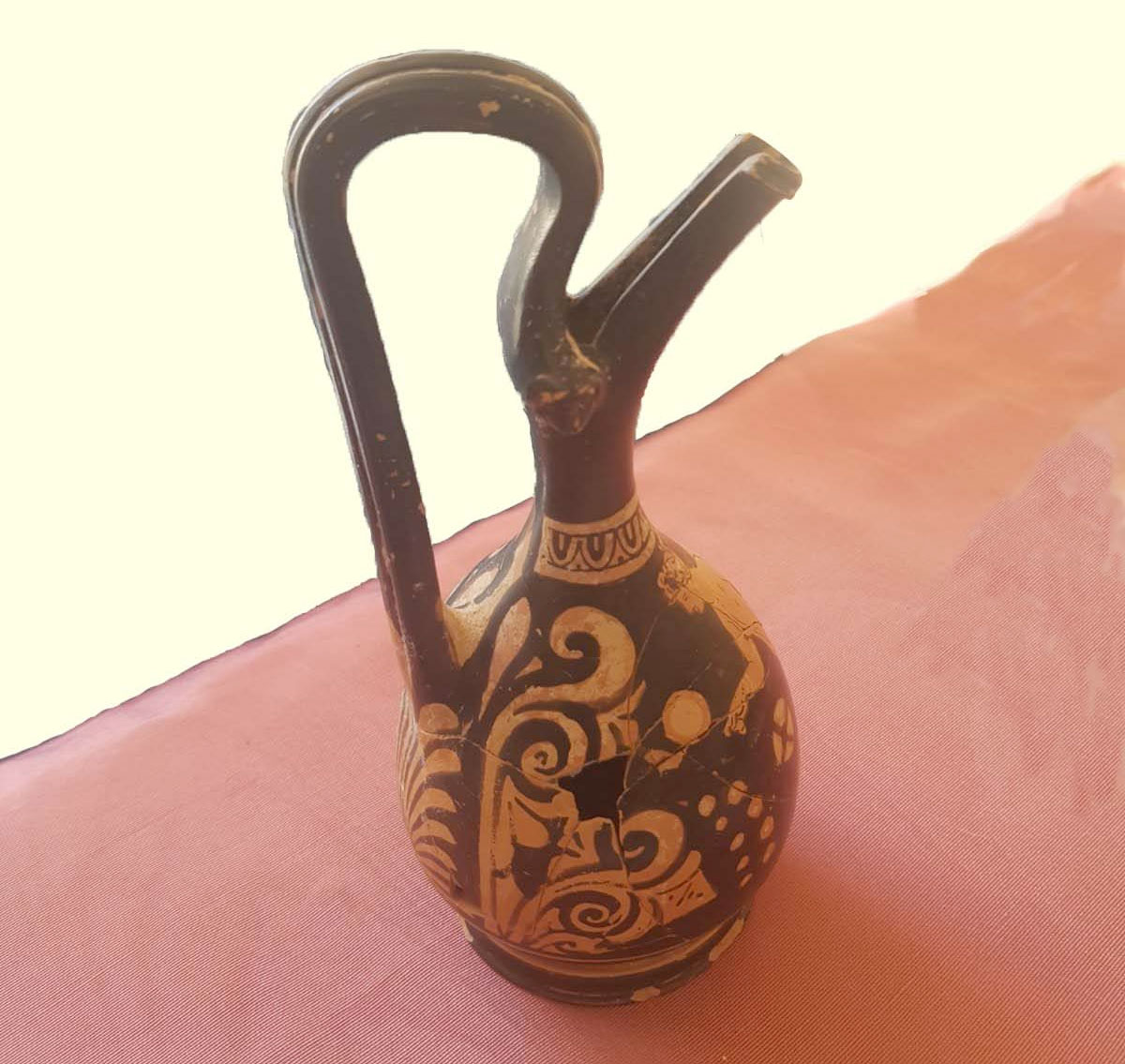 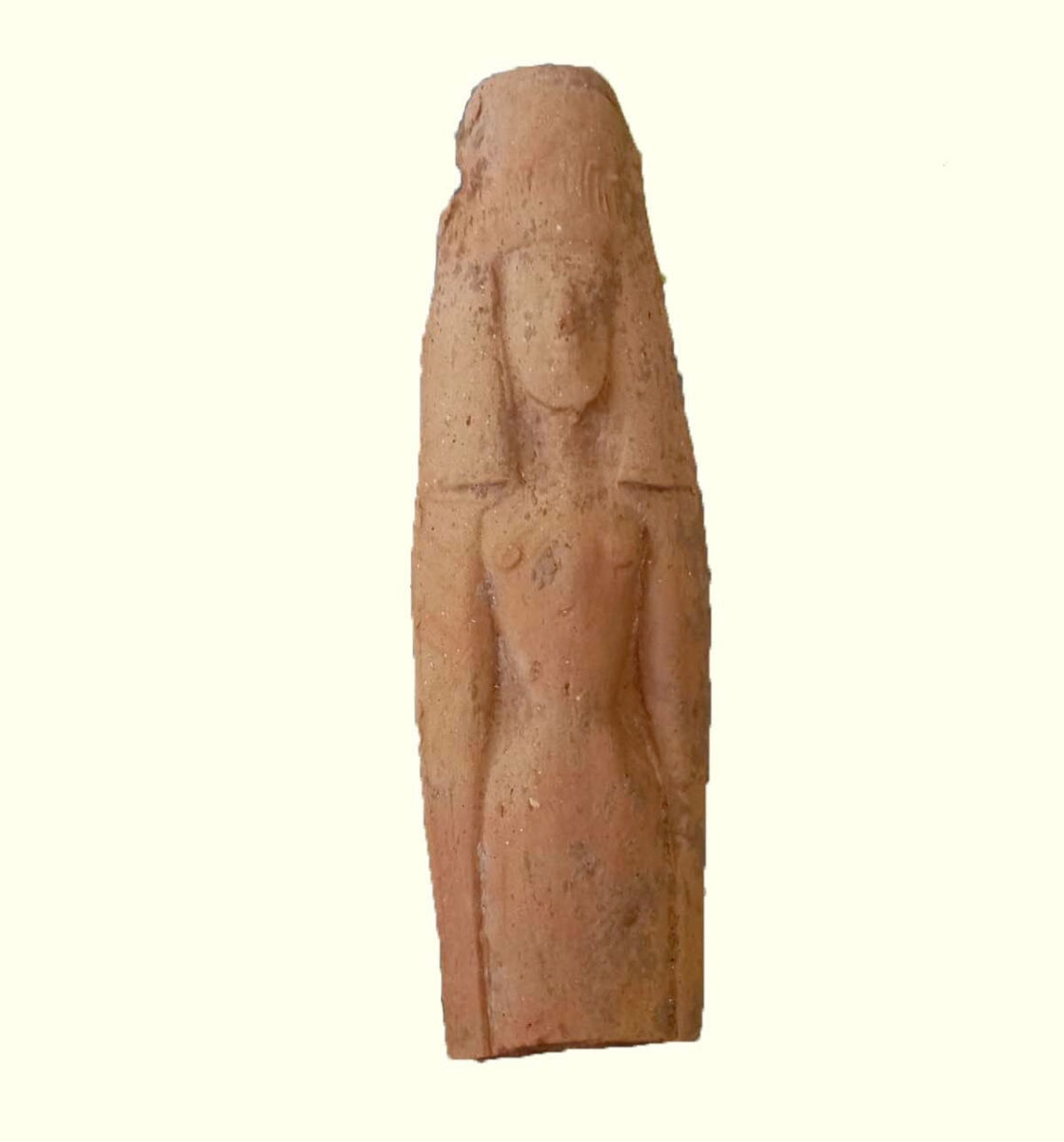 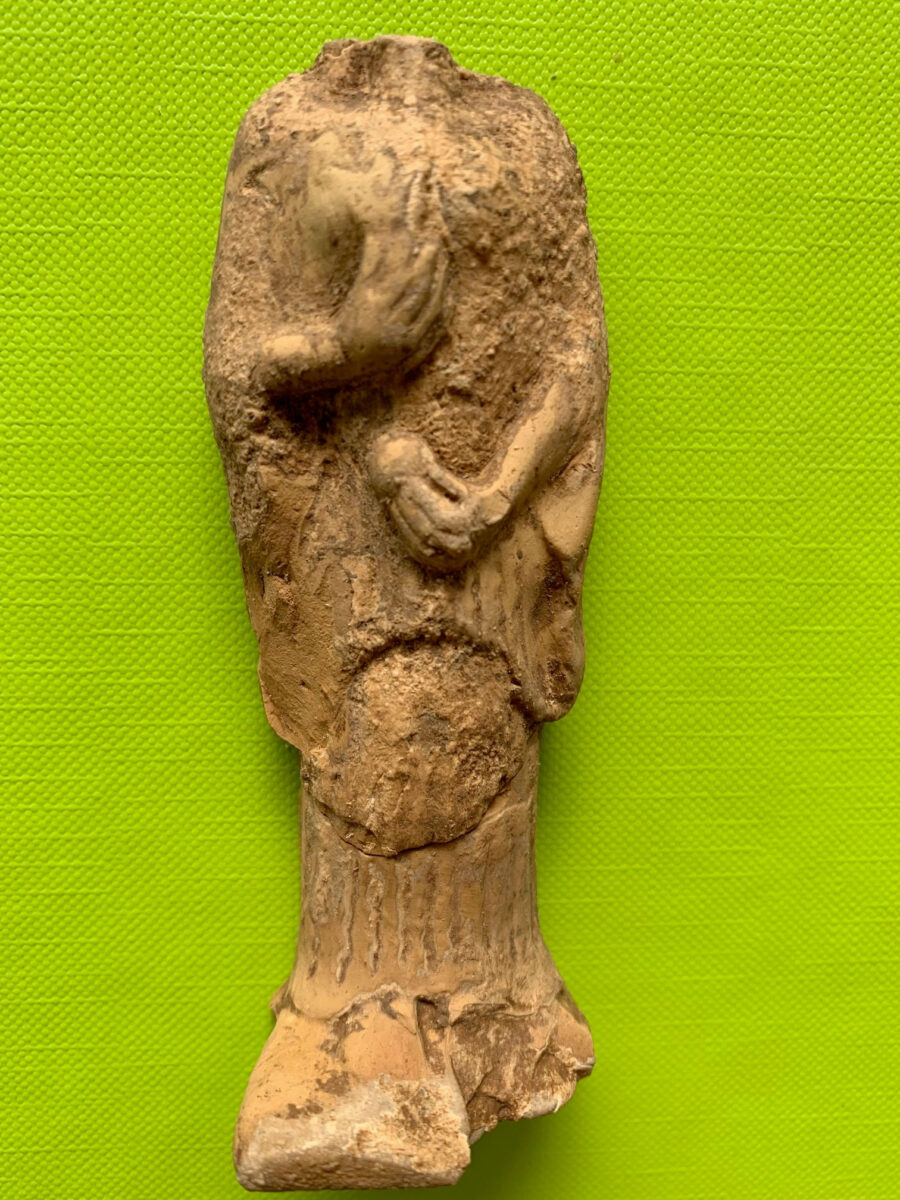 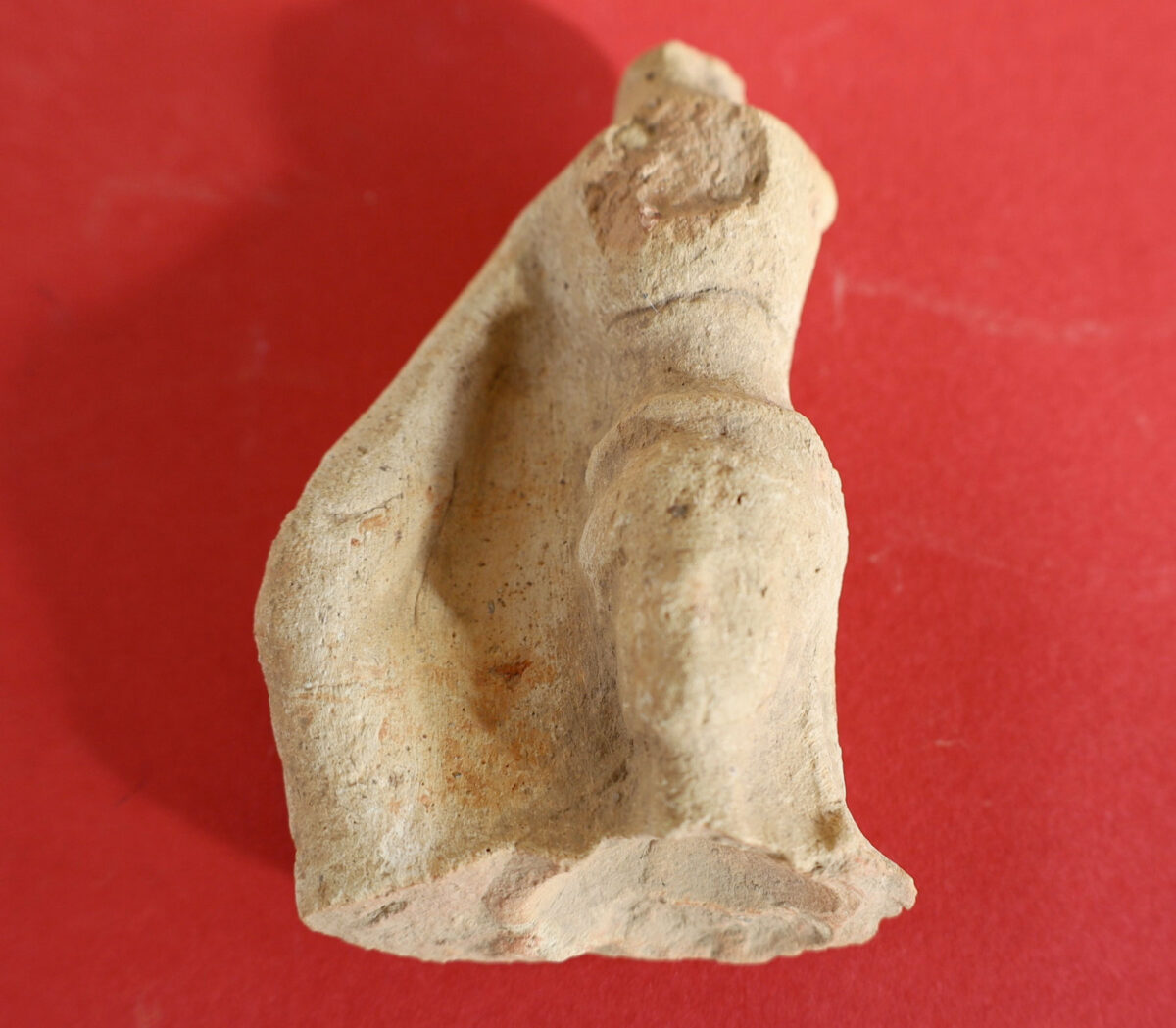 Τhe new finds from the acropolis of Falasarna

Mainly from the Archaic era

Findings predominantly from the Archaic period were brought to light by the excavation of the main area of the ancient temple of Demeter on the acropolis of Falasarna. The temple was situated on a rocky hill between two high mountain peaks in a natural cave with abundant water which collapsed at some point. After the destruction of the cave, the entire rocky knoll functioned as an open-air sacred place for the worship of a chthonic deity associated with the earth, water, fertility and the life-giving power of water in general. This is proved by the hundreds of clay figurines of female figures, enthroned deities, heads with  headdresses resembling the goddess Demeter, miniature water jars and water-carrying women, all typical finds in sanctuaries of the very ancient goddess Demeter.

The  building of the temple that survives today was rebuilt with stone to be used a second time round at the end of the 4th/beginning of the 3rd century BC on the same rock where the cave and the earlier cult existed. The temple is defined by an enclosure still surviving for the most part, except for a section that appears to have been destroyed by a huge boulder.

A monumental staircase led to two single-room buildings with a common intermediate wall, and a common retaining wall on the north side. The eastern building was the main edifice of the temple, while the western one probably served as an auxiliary structure. A door in the eastern part of the inner sanctum led to an outdoor area where the sacrifices took place.

The floor in the  inner sanctum was paved like the others in the temple. On it were five cases for depositing offerings, inside which were elegantly shaped good quality vessels, some of a ceremonial nature, one of which was inscribed in the Doric dialect with the name of the goddess to whom the temple was dedicated: ΑΚΕΣΤΩΙ ΔΑΜΑΤΡΙ (Akestoi dedicates to the goddess Demeter).

The temple was of the Doric order, built on the natural rock with two non fluted columns, parts of which have been preserved. The roof was of the Corinthian order with clay sleepers and covers. Based on the study of the excavation data and the architectural members, it seems that the graphic restoration of the monument will be possible, as well as the temple’s future restoration.

The rocky areas and ancient pit deposits that were excavated revealed findings mainly from Archaic times. Daedalic art seems to be prominent in the Early Archaic period (650 BC) in the form of nude female figures with Daedalic hairstyles and high headdresses. Standing out among the findings of the 6th c.B.C. are objects made of Egyptian and Phoenician glass, terracotta bird and animal pendants, arrowheads and spearheads, miniature vases, enthroned female figures, and a female figurine holding a poppy and pomegranate. Regarding the findings of the 4th and 3rd c.B.C. little water pitchers stand out, a beak-spouted ritual prochous with a red figure depiction of a flying cupid, iron spikes and alabaster vessels.

The geophysical surveys were carried out by professors G. Tsokas and G. Vallianatos with teams from the Mediterranean University of Crete. The scans showed architectural remains underground and their shape on the bottom side appeared to be semi-circular. However the image did not clearly show the semi-circular arrangement on the upper part, to be able to identify the ruins as belonging to what was once a public building, e.g. a theatre or bouleuterion. The picture given by the geophysical surveys will only be completed by the excavations and lead to a complete interpretation of the monument.

The excavation was supervised by the Ministry of Culture and Sports and the support of the Director of the Ephorate of Chania Dr. E. Papadopoulou, with the participation of the Ephorate’s archaeologist Dr. Michael Milidakis and master craftsman K. Mountakis. Also taking part were archaeologists Dr. Michael Benton, K. Borboudakis, P. Zerboudakis and G. Apostolakis and architects T. Nakasis and N. Michaelidis. E. Katsoulakis and K. Nikolakakis worked on the conservation. The craftsmen were S. Hiseni, H. Kounelakis, M. Markakis, E. Selimi, H. Moussa, G. Charalambakis and E. Partali. The project was carried out with the sponsorship of the Thanasis and Marina Martinou AEGEAS AMKE Foundation, the Ministry of Shipping and General Secretariat of the Aegean with the personal interest of the Minister Mr. I. Plakiotakis and the Association of Friends of Ancient Falasarna.