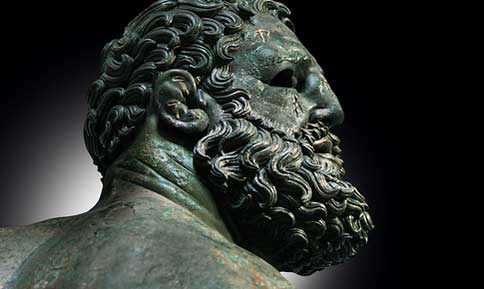 Along with reconstructions developed especially for the show, these objects will demonstrate the tremendous innovative impetus underlying the aesthetic and intellectual developments of that age. Greek Classicism is regarded as the foundation of the values and culture shared by the countries of Europe, and as such has continued to have an extraordinary impact on European culture to this day. Yet our perception of that epoch, which waxed and waned more than 2,500 years ago, is strongly limited and often manipulated. On the one hand, a significant portion of the original works of art and writing has been irretrievably lost; on the other hand, Roman copies and various phases of neo-classicist reception often distort our view of what has survived. In the Frankfurt exhibition, original masterworks of Greek bronze sculpture and painting – among them spectacular new finds from Porticello and Brindisi – will offer a different, unadulterated picture of classical art. In addition to a large number of loans from collections as far-flung as Berlin, London, New York, Paris, Rome and St Petersburg, the reconstruction of a Riace warrior and the hunting fresco of Vergina – developed on the basis of the latest scientific and technological insights – will bring the original appearance of world-famous masterpieces back to life. A comprehensive catalogue offering a nuanced overview of current scientific and scholarly findings on Greek Classicism will accompany the show.