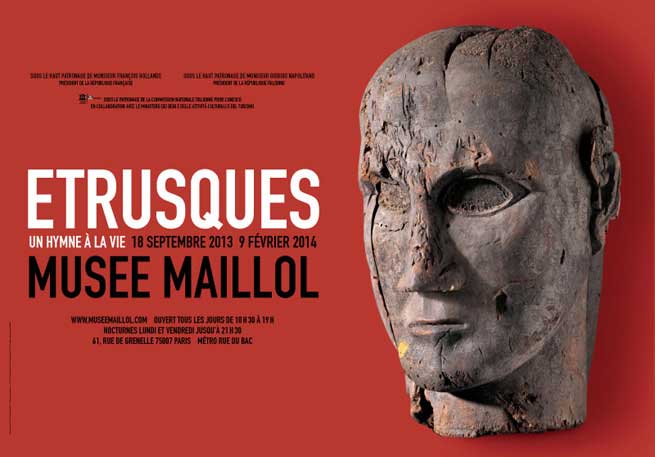 Etruscans: a Hymn to Life

A people, generally believed to have originated in the East, shrouded in the mystery of an impenetrable language, the Etruscans were, before Rome, in the leading role among the Mediterranean’s great civilizations. Sailors and merchants, the Etruscans evolved in a context enriched through international trade and exchanges, notably with the Greeks, of whom they were both emulators and rivals.

The exhibition organized by Musée Maillol explores, in an unprecedented way, the daily life of the Etruscans. It tells the extraordinary adventure of a people that developed between the ninth and the second centuries BCE, in an area that today corresponds to the Italian peninsula. The image of the Etruscans is too often told only through stories associated with its funerary world. The discovery of many graves, especially during the nineteenth century, greatly emphasized this fundamental component and constituted archaeologists’ primary source. Thus we have tended, incorrectly, to detach them from the world of the living. It is precisely the different aspects of daily life of this happy and peaceful civilization that will be highlighted in this exhibition, through the exploration of the great cities of this confederation: Veii, Cerveteri, Tarquinia and Orvieto. Religion, writing, weapons, painting and sculpture, craftsmanship in gold and silver, bronze and ceramics will be on display. The development of knowledge of their environment, fundamental to our understanding, will also be expanded. We will see a very distinctive architecture, far from classical canons, adorned with large terracotta decorations, accented with extremely vivid colours. The exhibition will present 250 works from prestigious institutions in Italy and other European countries, under the patronage of the Ministero per i Beni e le Attività Culturali and with the participation of the Museo Nazionale Etrusco di Villa Giulia, Rome; Vatican Museums, Rome; Capitolini Museums, Rome; Museo Archeologico, Florence; British Museum, London; Bibliothèque Nationale de France, Paris; Martin von Wagner Museum, Würzburg; Staatliche Antikensammlungen and Glyptothek, Munich.

The exhibition proposes an interpretation focused on the Etruscans’ way of life through the evolution of their habitat: primitive ninth-century BCE huts to patrician houses with their refined interiors. The sumptuous world of princes and the proliferation of “city-states” during the apogee of the seventh and sixth centuries BCE will be examined through art, economy, customs and costumes, and expressions of the sacred. A selection of objects, artworks and architecture trace the long history of ancient Etruria, from the origins of cities at the meeting with Mediterranean civilizations to the birth of writing: refined gold and silver jewellery which belonged to the Etruscan aristocracy – clasps, earrings, brooches, necklaces enriched with stones and amber – richly decorated bronze vessels destined, as were the painted ceramics, for banquets with eminent people. Mythological figures that adorned the temples; stunning representations of ancestors, like those of the palace at Murlo or funerary monuments –as luxurious inside as outside. These objects illustrate each of the major Etruscan cities from which they come, delivering to us their special characteristics and enlightening us on the remarkable vibrancy of this civilization: masterpieces from master coroplastes of the school of Veii, numerous productions from the workshops of Cerveteri, extraordinary examples of painting from Tarquinia, impressive stone sculptures from Vulci, terracottas from the temples of Orvieto and artistic expressions from Chiusi, Populonia, Perugia and Volterra. Finally, this climactic period was succeeded by long years of turmoil, the conquest of their territories by the Romans, until their annihilation. This exhibition will commemorate the disappearance of a people who left behind a fascinating cultural heritage, which we can access only partially, but which had a profound influence on Rome.