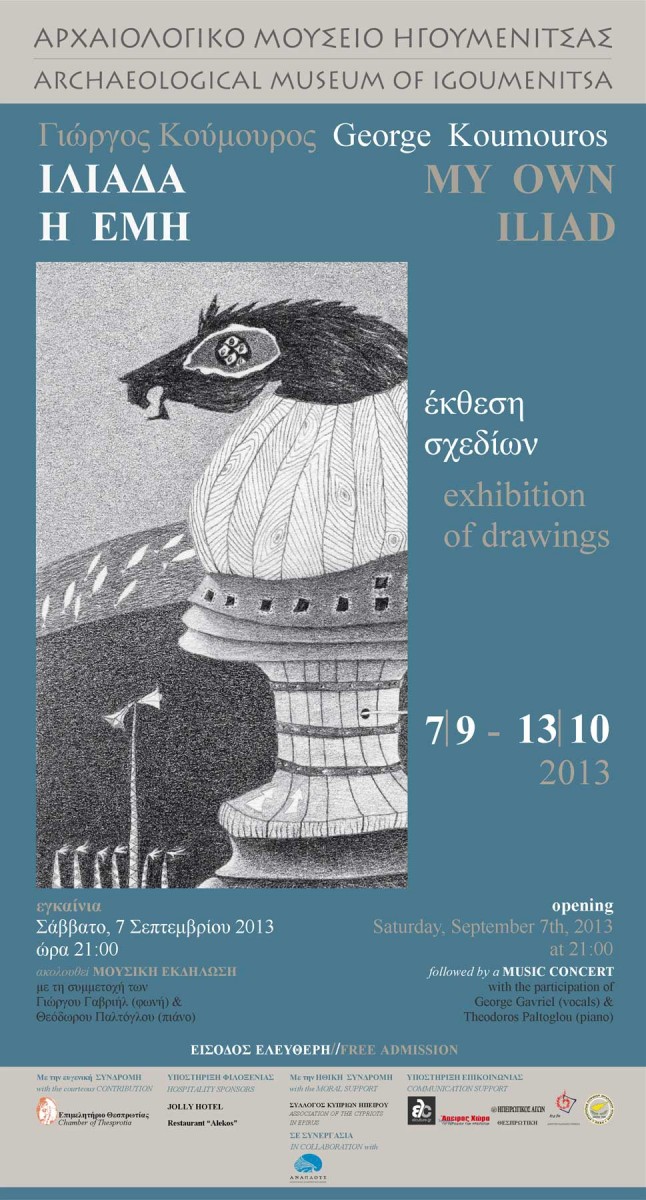 Launching on September 7th and until Οctober 13th 2013, the exhibition of drawings by the Cypriot painter George Koumouros entitled “My own Iliad” will be hosted at the Archaeological Museum of Igoumenitsa under the auspices of the 32nd Ephorate of Prehistoric and Classical Antiquities.

The exhibition, which commenced touring last June from the Archaeological Museum of Delphi, presents the 35 original sketches (pencil on paper), created by the artist during the year 2008 in Cyprus and the United Kingdom, which are corresponding to an equal number of episodes in Homer’s Iliad.

The exhibition’s album (a bilingual publication in Greek and English) includes George Koumouros’ drawings, accompanied by his explicative captions, as well as extensive literary notes, by distinguished scholars, with reference to the protagonists and the events of the Homeric Iliad.

The artist, George Koumouros, comments on his work: “Recently, I had to draw strength from the myths. Or, rather, to hide inside mythical forms in order to continue to exist and endure. I had to dig deep within me to find the ideas beneath the words. Curiously, I re-encountered Homer, my “own” Iliad at its roots. That is, the Iliad of my childhood, which extrapolated over time into contemporary situations. Individual or collective.

In difficult times, where I could have only a piece of paper and a pencil in my hands, I created sketches. Black and white. Lights and shadows only. A long and lonely route through Homer’s passageways. I followed it, as I did when I was a child, without prejudice, without commitments, without conventions and handed-down morals. So, I wove the myth from the beginning, encountering my “own” Iliad; yet, with Homer always present to judge me and offer me counsel”.

About the artist and its work short speeches will be offered by Andreas Katsouris, Professor Emeritus of Ancient Greek Philology at the University of Ioannina – President of the Association of the Cypriots in Epirus and Vassileia Katsani, Managing Director of “Anaplous”.

The night will conclude with a music concert performed by George Gavriel (vocals) and Theodoros Paltoglou (piano) who will interpret beloved pieces of well-known Greek and Cypriot composers and other songs in the Cypriot dialect.

The presentation of the exhibition of drawings by the Cypriot painter George Koumouros entitled “My own Iliad” at the Archaeological Museum of Igoumenitsa is organized by the 32nd Euphorate of Prehistoric & Classical Antiquities, in collaboration with the office of cultural & educational projects “Anaplous”, with the courteous contribution of the Chamber of Thesprotia, the hospitality sponsorship by the Jolly Hotel and the Restaurant “Alekos”, as well as with the moral support of the Association of the Cypriots in Epirus and the communication support by elculture.gr, “Apiros Hora”, “Epirotikos Agon”, “Thesprotiki”, “Dimotiki Radiofonia Prevezas 87.9 FM” and the Federation of Cypriot Organizations in Greece.

During the exhibition, the Archaeological Museum of Igoumenitsa will be running the educational program “My own Iliad”, addressed to organized school groups (1st~3rd High school classes).

The exhibition will be open during the working hours of the Archaeological Museum of Igoumenitsa, with free admission.