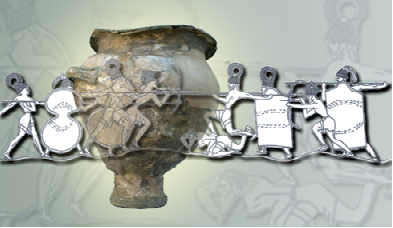 Shaft grave IV in Grave Circle A at Mycenae

Dr Kostas Paschalidis, Curator of Antiquities of the Department of Prehistoric, Egyptian, Cypriot and Eastern Collections, National Archaeological Museum, will give a lecture entitled “Shaft grave IV in Grave Circle A at Mycenae: The burials, the individual groups of objects and the case of the “Prince with the Warrior Krater” 140 years after its discovery”. The lecture is the first of this year’s Mycenaean Seminar series.

The 9th of November 2016 is an anniversary, i.e. exactly 140 years after the beginning of the excavations conducted by Heinrich and Sophia Schliemann, in Grave Circle A at Mycenae, which resulted in the birth of a new Archaeology on Greek soil and in the projection of the time scale, by at least eight centuries further back in the past. This was a development that perforce modified the presentation of the ancient remains, both in the bibliography and in the Museums of the time. Suddenly, in other words, time had to be given more space.

The excavation in the old royal cemetery at Mycenae, which ended on the 4th of December 1876, was completed in a particularly short period of time, without the necessary recording procedures, even by the standards of those times, and under severe weather conditions, with the result that everything we know from later publications is in fact fragmentary and incomplete. Nevertheless, investigations were supervised, on behalf of the Archaeological Service, by Panagiotis Stamatakis, the Ephor of Antiquities, a tireless, silent and methodical archaeologist. From the very first day of the excavation he recorded all the details about the progress of the work in a handwritten diary, as stipulated by the law. He did try to delimit the hurried mass removal of soil practiced by Heinrich Schliemann, something which increased the tension between the two men and caused the cessation of communications between them. Stamatakis did everything he could to record what was happening in every detail and then to arrange and transport the portable finds to Athens, where they were exhibited at the National Museum a year later.

The diary of Panagis Stamatakis, now kept at the National Archaeological Museum, was first used ten years ago by Dr. Lena Papazoglou-Manioudaki, who began the re-examination of all the burials in Grave Circle A. In this lecture, we are going to examine the case of tomb IV, present the history of the research, assign the famous finds to individual burials, all the time focusing on the enigmatic case of the youngest adult burial of Circle A, the prince with the Warrior Krater, who appears to have lived a short life, with great expectations.