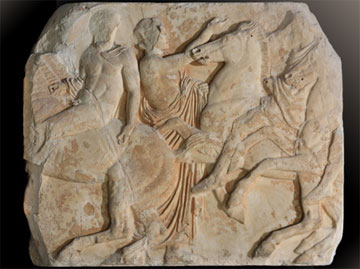 The beginning of the classical period coincides with the victories of the Greeks over the Persians. The leading role played by the Athenians during these wars was recognized among the Greek city-states and Athens in the 5th century BC became a political and cultural leader, the undisputed centre of every intellectual activity of the age, drama, philosophy, fine arts. The classical period was the age of great accomplishments in architecture. The Athenians preserved the ruins of the Persian Wars with respect, they neither rebuilt or restored anything but chose to erect buildings on new sites. The Odeion of Pericles, the temple of Apteros Niki (Unwinged Victory) and the Stoa of Zeus in the Agora are examples of buildings that revolutionized the architecture of the “golden age” of Athens which was however tarnished in the last thirty years of the 5th century by the war between Athens and Sparta.