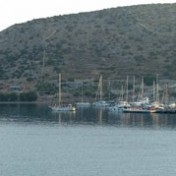 Byzantine settlement close to the new port in Schoenussa

Until recently, the discovery of the Byzantine remains next to  the location of the future port in the Cycladic island of Schoenussa created trouble to archaeologists and citizens alike. When the port which would be the main link of the island with the outside world would be ready, as the dig had to materialize first? And if the antiquities had to be overlooked for the sake of the island’s future, how ethically correct was to demolish a well preserved Byzantine settlement, where even the cooking pots had survived where their owners had left them centuries ago?

The recent decision to slightly change the port’s plan so as to save the Byzantine settlement has to be welcomed as efficient, reasonable and quite unusual for the Greek decision-making standards. According to the Central Archaeological Council, (the chief archaeological authority in Greece) the settlement’s excavation and underwater exploration will continue for six months, followed by restoring the finds. At the same time, the port’s direction has been altered so that it won t coexist with the Byzantine settlement and construction work will start as soon as possible.

Schoenussa’s inhabitants reach the number of 150. The current port has been characterized as inappropriate, so that ships’ stranding depends on the captains’ own decision. This situation – unbelievable for a 21st century EU country’s standards – results in a number of problems, especially in winter. It is notable that difficulty to reach the island had been “supportive” to the largest illegal antiquity scandal ever recorded in Greece: the villa of antiquity dealer Ch. Michaelides, where a large number of antiquities were found in2006, is situated in Schoenussa.
Your text here…