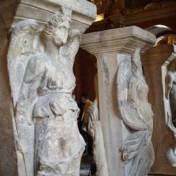 The return of the

“Bewitched”…. This was the name the people of Thessalonica called four two – sided Roman sculptures depicting eight mythological figures. The sculptures had been found connected to the house of a Jewish merchant and had removed by the Frenchman Emmanuel Miller in 1864 to find their way to the Louvre.

Now, the “Bewitched” or “Incantadas” – as known to the Sephardi Jews of the city – return to their city, but not as themselves. Specialists from the Louvre have constructed their “clones”, their exact copies which will be put in the statues initial place in the beginning of 2012.