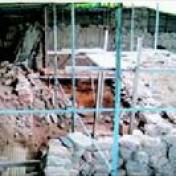 The impressive remains of a storage building dating back to the 12th century BC is the highlight of an extended archaeological site in Livanates (Locris)  Greece. With its mudbrick – on – stone base walls still reaching the height of 2 m. , the building, which also hosted workshops during the latest Mycenaean Era, is one of its kind in the Eastern Meditarranean. However, it is not the only unique element in the settlement…

Livanates, identified with the Homeric harbour-town of Kynos, contains remains (residential area, cemeteries and fortifications)  from 3000 BC to the 6th century AD, showing that it was never abandoned in the meantime. Archaeologists support that it is the only site between the areas of Volos (Thessaly) and Thebes (Boeotia) displaying so many diverse cultural elements.  Due to its immense importance, the cultural authorities have decided its transformation to an extended archaeological park with appropriate security and info signs. Known as Kynos, the site will be a cultural spot for modern time-travelers eager to visit a typical seaside town of ancient seamen sailing the Mediterranean, Homer’s Wine-Dark sea.