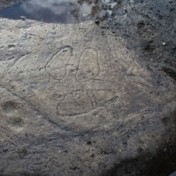 Footprints from the past in Norway

Bronze Age petroglyphs were revealed by archaeologists beneath an ancient burial mound in Stjørdal, just north of Trondheim, Norway. The enigmatic petroglyphs were found below the remains of two cremations situated on top of a natural hill which was, itself, the mound’s base. Motifs included eight footprints, while more footprint-shaped petroglyphs, along with drawings of ships, were later located on nearby rocks. Field director Anne Haug, head of the research team of the Norwegian University of Science and Technology, dates the petroglyphs to the Norwegian Bronze Age (1800-500 BC). Though unique in the area of Stjørdal, the petroglyphs find parallels at similar drawings of Østlandet and Jong, Norway and Bohuslän, Sweden. What is still a mystery, is the type of connection the footprint motif had with funerary practices, given that its constant presence on funerary sites cannot be random.