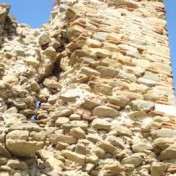 The “Anaktorpoupolis” (City of Palaces) in Nea Peramos, Kavala, Greece, will undergo serious restoration work, starting from the coming April.
Archaeological authorities came up with the above decision after an  announcement by Paggaion Municipality  – where the site belongs – that the city walls are threatened with collapse as severe damages on several parts of them have been recorded.
The “Anaktoroupolis”, is a Byzantine site dating from the 12th century AD on the basis of coins minted during the reign of Alexios III (1195-1203).