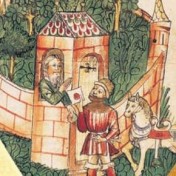 Scuba diving in the sea, making primitive airplanes, fathering kids with Amazons, being a Muslim, a Christian and the child of an Egyptian Pharaoh at the same time, stealing Solomon's Wisdom and giving it to Aristotle, philosophizing with Indian naked philosophers… Who is it?

This is not an updated version of a Chuck Norris jokes’ series but a series of traditions implying the deeds of Alexander the Great. Evidently trying to imitate gods through his official presentation, as well as declaring himself as the son of Zeus – especially in his manifestation as Amun – as well as offspring of Hercules and of Achilles, but especially through his actual conquests, Alexander managed to become in the 33 years of his life the most influential personality the world has known. Through the ages and the political-religious changes in the places he conquered, his legacy was influenced with various traditions. This is how he was linked with Solomon and Jesus, Brahman faiths and Buddha, Muhammad and Zarathustra at the same time. How it all began and proceeded is recorded in the new work of Richard Stoneman (Yale University Press), worth having a look. A Greek translation is out this month (Topos Publishers).