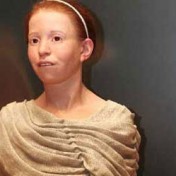 The reconstructed image of a girl victim of the plague that hit Athens in 430 BC, killing 50.000 people (among them Pericles) , is now traveling to Montenegro. After an expedition dedicated to the unfortunate Athenian – named Myrtis by the modern scientists –  in her city and also Thessaloniki, her face ( (which was reconstructed by her remains found in a mass grave in Kerameikos, Athens) will be shown in the Montenegrean capital Podogorica from the 20th of March to the 20th of April. This is one of the few times ancient human remains from Greece cross the borders for scientific reasons.