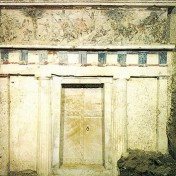 Macedonian Tombs to be Restored.

Ten well-known Macedonian Tombs will be reviewed and restored where needed through the framework of the EΣΠΑ fund for Macedonia and Thrace 2007-2013. Four of the tombs are situated in Vergina, four in the site of Lefcadia and the remaining two in the site of Palatitsa. Among the tombs to be restored is the one of Philip II – father to Alexander the Great. However, all of them bear characteristic architectural elements, while in most of them one can find exquisite as well as rare examples of ancient Greek wall paintings. The refurbishment will cost around 1,5 million Euros.