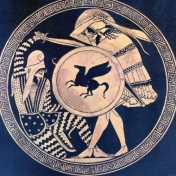 As expected, the central part of the modern city of Athens is built over the ruins of its more or less illustrious past, antiquities of Ancient Greek, Greco-Roman and Byzantine origins. Despite worldwide admiration, this often creates problems to modern Athenians when finding antiquities in sites allocated for public buildings…

Such was the case of the plot allocated for the building of the two schools, who are to serve the needs of children from the age of 4 to 11 living in a nowadays deprived area of central Athens. Archaeological finds located by archaeologists surveying the area before building starts include a road whose layers cover from early Classical to the Roman period as well as magazines flanking this ancient “high street” from both sides. Another road leading to the – known from Thucidides “Epitaph”  – Demosion Sema (Common State Grave), was also found in the same area alongside an ancient cemetery.
The importance of the finds along with the need to build the school led the architects to an amazing idea. The school will be built in such a way so that it won’t harm the antiquities, which will be covered with glass cases. The plan has been applied with success in the New Acropolis Museum courtyard, and – in a much smaller scale – in a number of Athenian buildings including underground stations and a Zara store!

Upon the school’s completion, young pupils will be able to look at the antiquities during their class breaks, while a number of educational programmes older children will have the opportunity to solve the secrets of the mysterious structures under their school, revealing that before them other kids would be playing in these cobbled streets of central Athens.