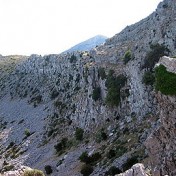 Living on the Edge: the case of Karfi, Crete

Seventy years after its first investigation, Karfi , an early Iron Age settlement in Lasithi, Crete, Greece was the subject of a new pilot excavation in 2008.  The main aim was to provide an up-to date set of contextual records for the site, filling in interpretative gaps left by the original extensive excavation, and to use these to help investigate the likely complexity of social systems at the largest new communities founded in Crete after the collapse of Bronze Age states c. 1200 BC. Recent research on sites of this period in Crete has tended to focus on small villages, leaving many questions unanswered: larger sites researched to date often developed into poleis, so that crisis-period remains are covered by those of the later Iron Age to Archaic periods and thus poorly preserved. Occupied only between the crisis horizon c. 1200 and an important PG shift involving the nucleation of regional communities at large ‘proto-polis’ settlements, Karfi offers special insight into the challenges of creating and holding together large, potentially diverse new communities in crisis circumstances. It has one of the most dramatic of the new settlement locations in Crete, on steep-sided peaks 1100 m above sea level which had never previously been settled. The social and economic adjustments needed here were thus particularly sharp and urgent, yet this large new group managed to make them successfully: our project focuses on the examining the structures enabling this. The process seems to have involved legacy practices from the pre-crisis period as well as the development of new institutions and practices more complex than those seen at smaller sites. The site’s remote area has had other, highly specialised uses in its history on which the new investigation also throws light. These uses highlight not only the resonant nature of this landscape in ancient consciousness, but the ways in which such resonance, with its cultural dimension, could be exploited in the construction of enhanced social and economic complexity during the later Cretan Early Iron Age, as a new kind of state came into being.