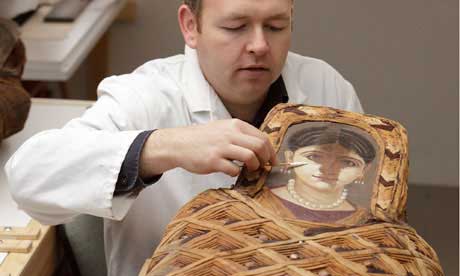 Three beautifully restored mummy portraits of well-off young people who were, 2,000 years ago, probably members of a mysterious group called “the 6475” are to go on display at the new home for one of the most important Egyptian collections in the world.

The three faces – an enigmatic, beguiling young woman and two handsome men – will go on permanent display at Oxford’s Ashmolean museum next month as part of the second phase of its redevelopment.

The £5m Egypt project is allowing the museum to display stunning objects which have been in storage for years with twice as many mummies and coffins being shown.

The oldest, on linen, is of a young woman dating from 55-70AD, excavated by Flinders Petrie – the founding father of Egyptology in the UK – at the Roman cemeteries of Hawara in Fayum, south-west of Cairo, in 1911.

Petrie had to do some immediate field conservation which involved him heating up paraffin wax in a double boiler and pouring it over the portraits he found.

It was a method that provokes only a slight shudder from Mark Norman, head of conservation at the Ashmolean. “We may or may not agree with what he did, but it worked,” he said. “If he hadn’t done it, we wouldn’t have the objects.

“We’re not judgmental. We can condemn what our predecessors did but in 20 years somebody might be saying: ‘what were those idiots at the Ashmolean doing with that or this or the other.'”

That she looks so fresh and luminous is the result of work by the museum’s paintings conservator, Jevon Thistlewood, who also worked on the mummy portraits of the two men, which date from around 100 years later.

They are extraordinarily moving portraits, said Susan Walker, the Ashmolean’s keeper of antiquities.

The detail in the woman, who would have been alive during the time of Nero, is particularly striking. She has pale skin, certainly compared to the men, and it signifies reasonably high birth. She was not someone who had to be out in the sun working every day.

She has also been rouged and is wearing gold ball earrings of a sort that are known from Pompeii, a gold necklace, a red hairband with pearls hanging from it and a purple mantle around her shoulders. Walker also believes she is wearing a skullcap.

“She is from a well-born family although they are not super rich, these people. They are prosperous within their own communities.”

It is thought the people in the portraits were the direct descendents of the original settlers in the Fayum, who were Greek mercenary soldiers who fought for the Ptolomies. They were given the land and adopted the Egyptian way of life.

Their lineage mattered because when the Romans conquered Egypt they taxed Egyptians much more harshly than Greeks in places such as Alexandria. The people in Fayum managed to get a discount by arguing that they too were Greek.

The community in Fayum called themselves the 6475. “It must either be the surviving number of descendants or, possibly, the number of people who were settled there in the first place,” Walker said.

All three deliberately present themselves in a very Roman way – the woman has her jewellery and the men wear clavi, white tunics with red stripes.

There are still disputes over mummy portraits, for example whether they were done while the subjects were alive or after they were dead, as part of the 70-day mummification process.

Walker, however, said the evidence suggests they were done at or shortly before the time of death by artists associated with the cemeteries.

“Egyptologists are always very scathing about Roman mummification, which is not what it had been in the Pharaonic period,” said Walker. “But they certainly tried to get it right.”

The restoration is part of an enormous conservation project, one of the biggest of its type in recent history. A year ago, staff at the Ashmolean removed around 50,000 objects from the old displays, many of which were sent to the museum’s new conservation studios.

They joined items, such as the mummy portraits, from storage..

The new galleries are the second phase of the Ashmolean’s redevelopment and follow the dramatic internal overhaul of Britain’s oldest museum by architect Rick Mather. That was unveiled in 2009 and on 26 November the public will finally see the all new Ancient Egypt and Nubia galleries, also redesigned by Mather.