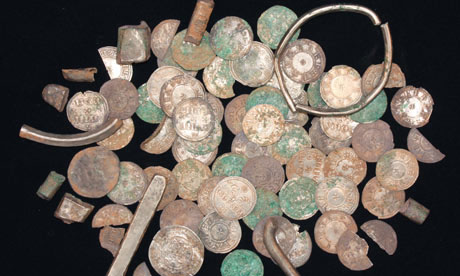 Who left 92 pieces of valuable loot on the edge of the Lake District in the 10th century? Barrow’s Dock Museum and its big sister in Bloomsbury, London, are on the case…

After the golden finds in Leeds and Tadcaster in Yorkshire, here is an impressive amount of silver which a detectorist has unearthed on the Furness peninsula (the beautiful approach to interesting Barrow where, a propos of doom-laden suggestions that northern manufacturing has ceased, we still make ships).

This find may have more than usual historical significance according to initial analysis which dates it to around 955 when Norse invaders were having a rough time in the face of an Anglo-Saxon counter-attack. Documentary history has it that England was a unified entity under King Athelstan, after a gathering of English sub-kings and thegns at Eamont Bridge, on the 12th July, AD 927. (If their ghosts are still around, incidentally, they may be impressed by the village’s new flood defences).

Vikings in possession of 92 pieces of valuable rare silver coins and other booty, including silver ingots and one almost-complete silver ‘hack’ bracelet, could suggest that Furness was holding out against this alliance. Mind you, further tests may indicate that the hoard was deliberately buried and in a hurry, as they scampered for their longships.

The British Museum is expected to tell us more next month, especially on possible links to Viking settlement in the area in the 9th and 10th centuries. Dr Gareth Williams of the museum says: On the basis of the information so far, this is a fascinating hoard. By the mid-950s, most of England had become integrated into a single kingdom, with a regulated coinage, but this part of the north-west was not integrated into the English kingdom until much later, and the hoard reflects that.

It’s a good reminder of how much finds like this can tell us about the history of different parts of the country.

Surprisingly few buried Viking relics have been found previously in Cumbria, considering its long coastline and many other links. Norse place names abound, from Hackthorpe to Ulpha, and terms such as beck, fell, foss and tarn come straight from Scandinavian roots.

The 14ft Norse Cross at St Mary’s, Gosforth, is the tallest in England and there are other smaller ones, along with tombstones. But the main buried finds are the Penrith Hoard of 10th century silver Penannular brooches mostly found in 1989 at Flusco Pike, and a merchant’s weight dug up in 2006 on the Furness Peninsula. So Cumbria Tourism is very pleased with the new discovery.

Its managing director Ian Stephens says: The significance of this hoard is not to be underestimated. We hope that once an independent committee provides the British Museum with a valuation, fund raising can begin in earnest to ensure that this exceptional find can be kept in Cumbria, with its rightful home at the Dock Museum, Barrow, thereby helping to put Cumbria’s richly important Viking heritage on the map.

Fund-raising by the Dock Museum will start when the British Museum sets a price under Treasure Trove.