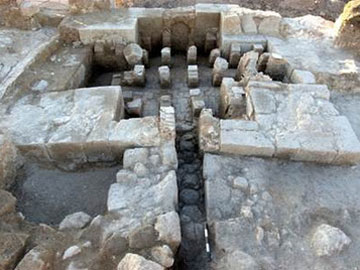 During work on the modern water infrastructure

Remains of an ancient bathhouse dating to the Byzantine period were exposed during work being conducted on the modern water infrastructure near Moshav Tarum in the Judean coastal hills. In recent months the Israel Antiquities Authority carried out an archaeological excavation that uncovered impressive finds in the wake of a fifth water supply system to Jerusalem being installed by Mekorot Co.

According to Dr. Rina Avner, the excavation director, together with Dr. Yitzchak Paz on behalf of the Israel Antiquities Authority, “This is a bathhouse that measures 20 x 20 m and dates to the fourth-fifth centuries CE. The remains visible in the field include the frigidarium (cold room), tepidarium (warm room) and caldarium (hot room), as well as a courtyard attached northeast of the bathhouse rooms. Two steps led up to a small cold-water pool located in one of the corners of the courtyard.

“It is possible the bathhouse was used by an inn situated on an ancient road that ran along Nahal Harel through the southern Ayalon Valley, and it might also have been part of a wealthy country estate – just like the pools in the gardens of villas in Caesarea today”. Dr. Avner stated that bathing in bathhouses during the Byzantine period is a continuation of the Roman tradition and that similar bathhouses were found in the past at Latrun and Caesarea.