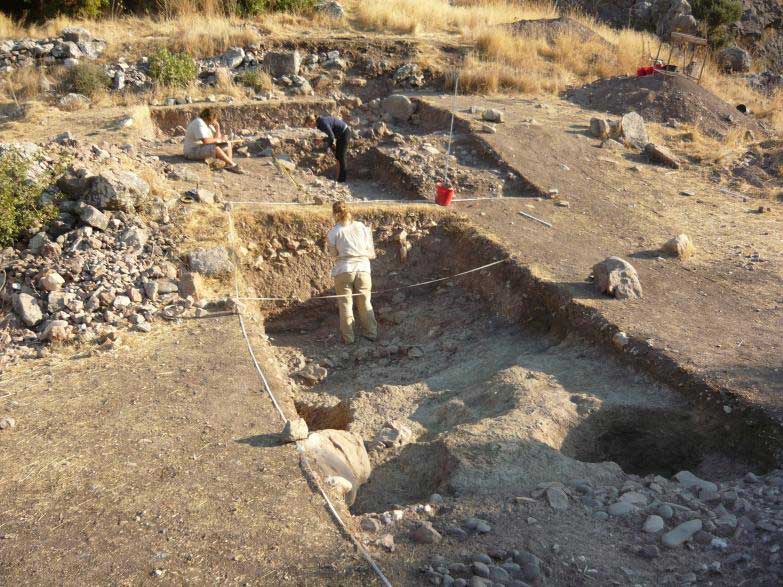 Excavations at the site of Prastio-Mesorotsos completed

The 2012 archaeological investigations at the site of Prastio-Mesorotsos in the Paphos district have been completed. From 23 June to 28 July a team led by CAARI Director and Fellow of the School of History, Classics and Archaeology at the University of Edinburgh conducted the fifth season of excavations at this multi-period site.

The site is extremely long-lived, with evidence for nearly continuous occupation from the Neolithic period to modern day. This year investigations focused on the Neolithic, Chalcolithic, Early and Middle Bronze Ages as well as the Late Roman and Byzantine periods. The extraordinary depth of deposits shows a great deal of continuity over time, suggesting social, technological and economic adaptation by the local inhabitants throughout prehistory and into the historical periods.

Particularly noteworthy is a sequence of superimposed buildings and activity areas dating from the Aceramic Neolithic period and continuing into the Chalcolithic and Bronze Ages. An infant burial in a domestic context dating to the Early Bronze Age shows evidence for the funerary customs of the inhabitants. The site developed into a very sophisticated culture in the Middle Bronze Age before its complete abandonment at the beginning of the Late Bronze Age, when there is evidence in the region for abandonment of the rural countryside and the establishment of an urban center at Palaipaphos.

The site was reoccupied from the Iron Age onward and in 2012 an area of the site was excavated to show a deep sequence of Late Roman and Byzantine activity. The local inhabitants at this inland site seem to have been very resilient to the periodic disruptions that affected coastal centres, so there is good potential to reveal a long sequence of Byzantine rural habitation and activity.