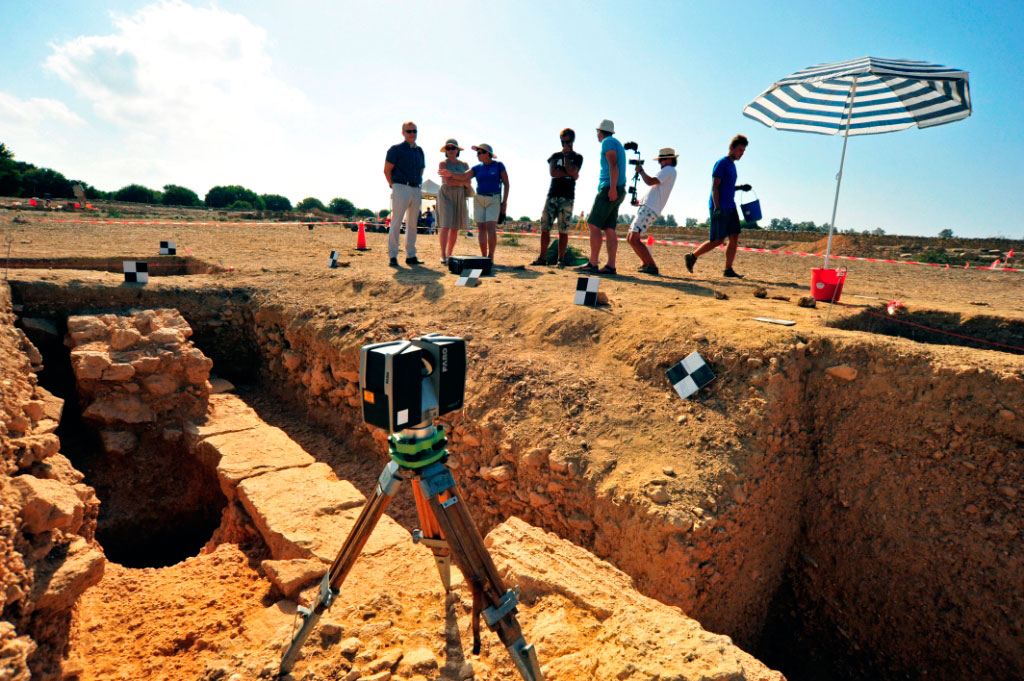 Results of the fifth season of excavations in the Pafos Agora have been announced. 2015 a new stage of the project began, which involves attempting to reconstruct the economic infrastructure and economic activity of the ancient city of Pafos, and thus expanded the substantive scope of the team’s work.

This year, works were conducted between August 19th and September 27th 2015 under the direction of Professor Ewdoksia Papuci-Władyka. The team comprised of 72 persons (35 staff, 24 students and 13 volunteers).

The work on the Agora (market-place) itself continued this year with approximately 95% of the area still to be examined. The team is attempting to reconstruct the manner in which this public space functioned, its appearance, life-span etc. However, the research goes beyond the Agora. Another aim is to apply non-invasive (geophysical) methods in order to investigate the economic infrastructure of ancient Pafos and specifically, the area within the Archaeological Park.

Excavations this year took place in all three already existing trenches that have been opened in the Agora as well as in a new one traced at the south-eastern corner of the agora square.

In Trench I, the main aim was to trace the continuation of the external walls of Building A and also, the internal walls of its rooms. This structure seems to be very large (the uncovered length of the south wall is now 16m) although its exact character remains unknown. It is expected that further work will clarify these issues.

Investigations also took place in Trench II in the east portico, the focus of trade activity of the Agora, at least in Roman times. The northern parts of Rooms 10, 11 and 12, partly excavated in 2012, were explored, as well as Room 1. As a result, a better understanding of the spatial organization of the portico is possible. It seems that it functioned, at least in Roman times, as a place to trade, and it had been isolated from the Agora itself by the wall: it was open to the outside of the Agora, facing the street running from the Agora to the east, in the theatre direction.

In Trench III, the eastern part of Room 1 in Building B was uncovered, and in the upper layer of the fill, a marble, Corinthian style column capital was found.

One of the aims of the 2015 season was to conduct geophysical research. This part of the project was conducted by specialists from Hamburg University and it covered a total area of 7275m2, in direct connection with trenches I-IV of the ongoing excavations and in the terrain south of the Agora. As a preliminary result shown by the processed and mapped data, some different (archaeological) structures in both areas were localized, but further processing of the collected data is needed. The prospection will be continued next year over a much greater area.

Three other groups of specialists also worked as part of the Project: one group (Jagiellonian University and freelance geodesist) performed the geodesic measurements in all four trenches and established the geodesic warp for all the Archaeological Park for future non-invasive geophysical research. The second group (AGH University of Science and Technology in Kraków) set up an inventory of newly exposed architectural structures using Faro Focus 3D scanner. The third group (Jagiellonian University and Warsaw University of Technology) were called to fulfill two tasks: to prepare the documentation for aerial photography of the site in order to create an orthophotomap and test the usefulness of close range photogrammetry in the current registration of the explored archaeological contexts.  The result was an orthophotomap, the initial version of which was successfully developed, as well as, the Digital Terrain Model (DTM ), which provided much new information concerning the spatial layout of the city; also, the usefulness of close range photogrammetry was confirmed.

Finally, geoarchaeological studies were undertaken by specialists from the Institute of Geography, Jan Kochanowski University in Kielce in the river valleys of Koskinas and Ezousas. The data collected will be used to reconstruct the sedimentary environment of the surrounding area of  Paphos and the phases of alleviation, which determined the changes in the shoreline near the Paphos archaeological site.

The project runs under the patronage of the Embassy of the Republic of Poland in Nicosia and the Ambassador, Barbara Tuge -Erecińska visited the site on 17 September.

The excavations are being conducted by the Department of Classical Archaeology of the Institute of Archaeology, Jagiellonian University (JU), Kraków, Poland within the framework of the Pafos Agora Project, which aims to explore and study the Agora of the ancient city of Nea Pafos, the capital of Cyprus in the Hellenistic and Roman periods.

The new stage of the project is supported by a MAESTRO grant (from the National Science Centre),