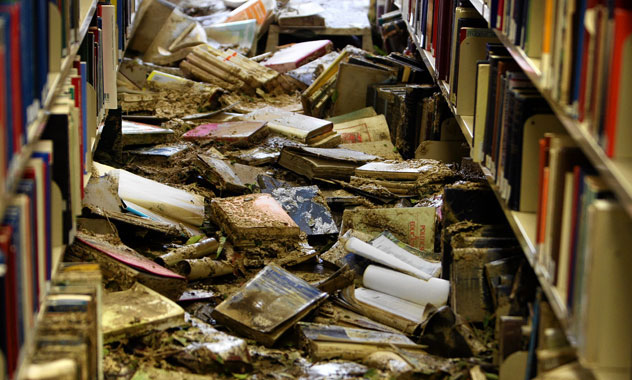 Ayutthaya – A musty odor reaches up from the basement of Maha Chulalongkorn University in Ayutthaya, an ancient capital north of Bangkok that was submerged for weeks during recent floods.

Manfred Anders from the Centre for Book Preservation (ZfB) in Leipzig, Germany, starts by throwing the windows open. ‘We need air in here, otherwise it will be a breeding ground for mould,’ he says.

A brown tidemark rings the ground floor wall of the former library about 1.5 metres high. Monks salvaged many of the 200,000 books by carrying them to higher floors, but they could not save all of them.

It was just one of the libraries badly damaged in the harrowing floods in October and November.

The director of the library, monk Maha Srithon Samajaro, nods forlornly between the hundreds of damp, rotting books. The university is more than 100 years old, but he doesn’t know how old many of the books are.

Anders and his colleagues Oliver Messerschmidt and restorer Jana Moczarskihas were invited by the Geothe Institute to bring their specialist knowledge to Thailand, where no one knows how to save the valuable books from mould and destruction.

Germany’s top book conservation team are in their element. The ZfB has been operating since the 1990s, when it started as a branch of the German public library.

It specializes in de-acidification, as well as catastrophes, and honed its skills after the 2002 flood along the Elbe river soaked tens of thousands of books.

It was also called in after fire extinguishers damaged thousands of volumes during the 2004 fire at the Duchess Anna-Amalia Library in Weimar.

In Cologne in 2009, when the city archives collapsed and the library partially sank into the groundwater, ZfB came to the rescue again.

In Ayutthaya, Anders takes a few books out of a plastic bag. ‘That is poison for books,’ he says. ‘They need to get air immediately.’

‘Most people are paralyzed, and still in shock,’ he says.

The ZfB team has already visited the private library of author Suchart Sawatsi in Bangkok, whose 50,000 books were nearly all submerged.

‘There were books on the floor that had already decayed into pulp,’ Anders says. ‘The top shelves stayed dry, those books should have been removed a long time ago. Mould is like a virus, one book infects the other.’

The ZfB took 10 of the most valuable books back to Leipzig, where they are now frozen, and will be freeze-dried and gamma-irradiated. It is the best method to recover valuable writings, but it doesn’t come cheap. The process costs 35 euros (45 dollars) per kilogram.

The University in Ayutthaya invited librarians from the entire region to meet the visitors from Germany and watch them demonstrate restoration methods on an upper level of a building.

‘When the books don’t dry flat, wet them again, and flatten them out,’ Moczarski says through her mask, and shocks her listeners by pouring water over an old book. ‘The mould can be dabbed off with a concentrated alcohol.’

She also wears gloves: mould is dangerous, and can cause asthma and serious lungdisease.

After the book is flattened, it should ideally be freeze-dried. An audience member asks how much the machine for freeze-drying costs. ‘400,000 euros,’ Anders says.

Air drying is bad because the pages stick together and allows the mould to grow back, but it’s the only alternative for many in Thailand.

‘Then you have to rotate the books every day, and flip through the pages every so often to let air in,’ Anders says. ‘Completely mouldy volumes should be immediately discarded, otherwise the mould will spread.’

The Buddhists monks nod and joke about the rebirth of the mould.

‘We’re really very grateful for the many tips,’ Maha Srithon Samajaro says at the end of the session.