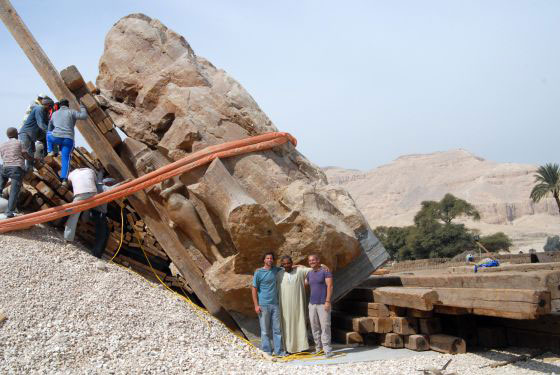 The two colossi of Memnon are now three!

Roughly, the two Colossi of Memnon that stand at the entrance to the ruined mortuary temple of Amenhotep III (on the west bank of the Nile at Luxor) now have a brother. The new statue was found100 metres behind the two famous statues and originally formed part of the monumental decoration of the ruined temple. It collapsed with its partner (the colossi of the building were built in pairs) during an earthquake at around 1200BC. The enormous statue, the northern one of the second pair, is a little smaller than its famous neighbours at 18m tall. Like the so-called statues of Memnon, it represents Amenhotep III. Following its fall it remained broken on the ground and eventually became covered with water and mud as the water table rose. It was found in 2002 and removed to solid ground where restoration work was carried out and the pedestal was reinforced with concrete. Last Monday the delicate task of raising the colossus into an upright position was completed. At the moment the team are still adding fragments to the statue, including the king’s right foot and some blocks of the pedestal. The official opening ceremony will take place on March 1st.