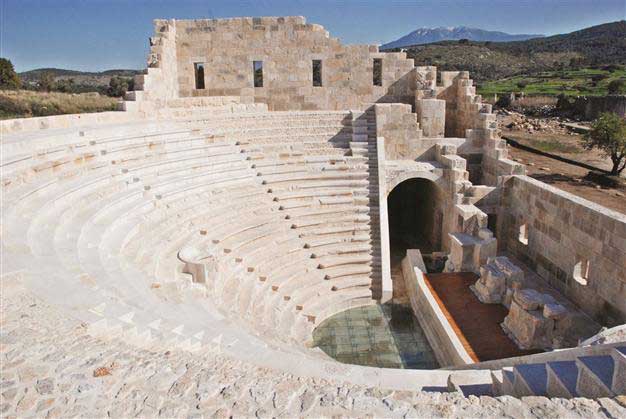 Nearly 7.5 million Turkish Liras were spent by the Turkish Parliament for the biggest restoration in Turkish archaeology history.

The 2-year restoration of the Lycian Union Parliament building in the ancient city of Patara in the southern province of Antalya’s Kaş district has been completed. Nearly 7.5 million Turkish Liras were spent by the Turkish Parliament for the biggest restoration in Turkish archaeology history.

The Lycian Union Parliament, which is regarded as the world’s first democratic Parliament, was discovered during the excavations carried out by the Akdeniz University Archaeology Department Professor Fahri Işık in 1991 and was brought to light by Professor Taner Korkut.

The historic building was built in the first century A.D. and served as a Parliament building for 500 years. A project has been prepared by the Antalya Committee for the Protection of Cultural and Natural Beings for the restoration of the 43-meter-long and 30-meter-wide building with a capacity of 400 people.

Restoration work started in 2010 under the leadership of Antalya University Archaeology Department Professor Havva İşkan and a scientific restoration committee. Within the two-year process, the building’s inside and outside walls, gates and stone sitting places have been completely restored.

Kaş District Gov. Selami Kapankaya said the building was used for theater and music shows after serving as a Parliament building. He said the representatives of all cities of the Lycian Union had gathered there.

“The region was administered in this building,” he said. “It collapsed in later years. The building was underground in the 2000s. With the support of Turkish Parliament, we restored this building and gave it to our country and the world.”

Kapankaya said the Parliament building was very important for Turkey. “In his book ‘The Spirit of Laws’ French intellectual Montesquieu says ‘I show the Lycian Union if I give an example of a perfect democracy from the ancient ages.’ The regime here was a model for the constitutions of some states in the world,” Kapankaya said. “Therefore it should be promoted to the world with an international program. Such an event will make great contribution to Turkey’s tourism.”