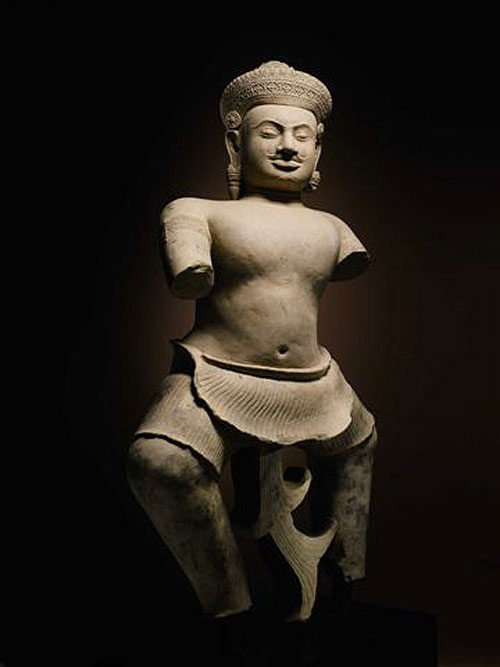 Federal agents have threatened to seize from Sotheby’s a 10th-century Cambodian sandstone statue, alleging the auction house planned to sell it despite warnings that looters had stolen the piece from its rightful place, adorning an ancient temple in the former Khmer kingdom.

Court documents filed Wednesday in New York say the Duryodhana statue — listed as the “Defendant in rem” in the complaint — was apparently torn from the Prasat Chen Temple in Koh Ker in northern Cambodia sometime in the 1960s or early 1970s, when the Asian nation was engulfed in civil unrest. The statue fell into the hands of a private collector in Belgium, whose heirs recently reached an agreement with Sotheby’s to sell it on consignment.

“In April 2010, Sotheby’s imported the Duryodhana into the United States and made arrangements to sell the statue, despite knowing that it was stolen from Koh Ker,” according to a statement from U.S. Atty. Preet Bharara in New York.

The statement said that immediately before the planned March 2011 auction, Cambodia’s government asked Sotheby’s to pull the piece from auction. “Sotheby’s withdrew the statue from the auction, but it remains in their possession,” said the statement, which accompanied a 27-page complaint outlining the piece’s journey — from the entrance of a temple dedicated to the Hindu god Vishnu to a well-heeled auction house in Manhattan.

According to the complaint, the statue’s lack of feet helped convince scholars it was stolen from the Prasat Chen Temple, because its feet remain embedded there. The embedded feet eventually were traced to the missing statue, which by then had been sold at auction in Europe and was destined to be sold again by Sotheby’s. The statue arrived at New York’s JFK Airport in April 2010.

Sotheby’s did not immediately respond to the Los Angeles Times when asked for its response to the federal allegations and whether it would comply with demands to hand over the piece; but the Associated Press quoted the auction house as saying in a statement that it did not have any reason to believe the statue had been illegally obtained.

“We have researched this sculpture extensively and have never seen nor been presented with any evidence that specifies when the sculpture left Cambodia,” the AP quoted Sotheby’s as saying.

The statue, which is about five feet tall, was expected to fetch more than $2 million at auction.