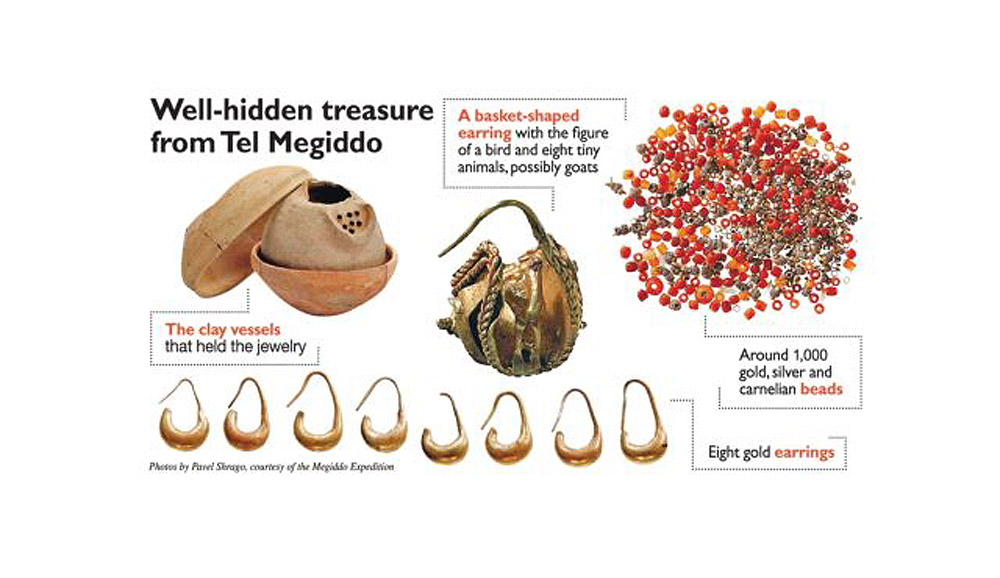 In the summer of 2010, while digging in the area of the ancient palace at Tel Megiddo in the Jezreel Valley, archaeologists from Tel Aviv University found a clay bowl containing a second clay bowl, inside of which was a small clay vessel, like some sort of ancient Russian nesting doll. The innermost vessel, which was packed with compressed dirt, was sent to the Weizmann Institute’s archaeology laboratory for a molecular analysis of its contents. Only after its return, six months later, did the archaeologists examine it.

To their surprise, the tiny clay pot was found to contain a precious treasure of gold and silver jewelry and semiprecious stones from 3,100 years ago. “This treasure began to pour out,” Prof. Israel Finkelstein of TAU’s Department of Archaeology and Near Eastern Cultures, related.

Finkelstein is a co-director of the Megiddo excavations, together with his TAU colleague Prof. David Ussishkin and Prof. Eric Cline of George Washington University.

The stash includes nine large earrings and a seal ring with a fish carved into it, all of them gold. The researchers also found more than 1,000 tiny beads made of gold, silver and carnelian, an orange semiprecious stone.

One of the earrings genuinely deserves to be called unique. It is shaped like a basket, inside of which is an ostrich and eight tiny animal figures, possibly goats. Nothing similar has ever been found in Israel or the entire Mediterranean region. The researchers believe its design was influenced by the Egyptian culture, which was dominant in the region at the time.

The archaeologists believe the collection dates from the early Iron Age, at around 1100 B.C.E. Megiddo was a Canaanite city-state under Egyptian rule at the time. At around 1130 B.C.E., the Egyptians withdrew from the area and Megiddo was destroyed. Finkelstein says the city thrived again later on.

If the dating of the latest treasure is accurate, it constitutes additional proof of the rebirth of Megiddo after it was destroyed the first time, toward the end of the Bronze Age. He said there are still many unanswered questions, including why the precious items were placed where they were, hidden but not in a deep hole. “People left them and didn’t return – people would return for something like that.”

The find was discovered close to the place where the Megiddo ivories, considered one of the most important archaeological finds in Israel, were found.

The collection is to undergo further tests, including carbon-14 dating for the linen cloth in which the jewelry was wrapped, to get an accurate estimate of its dating. The researchers also hope to determine where the silver in the collection was mined.