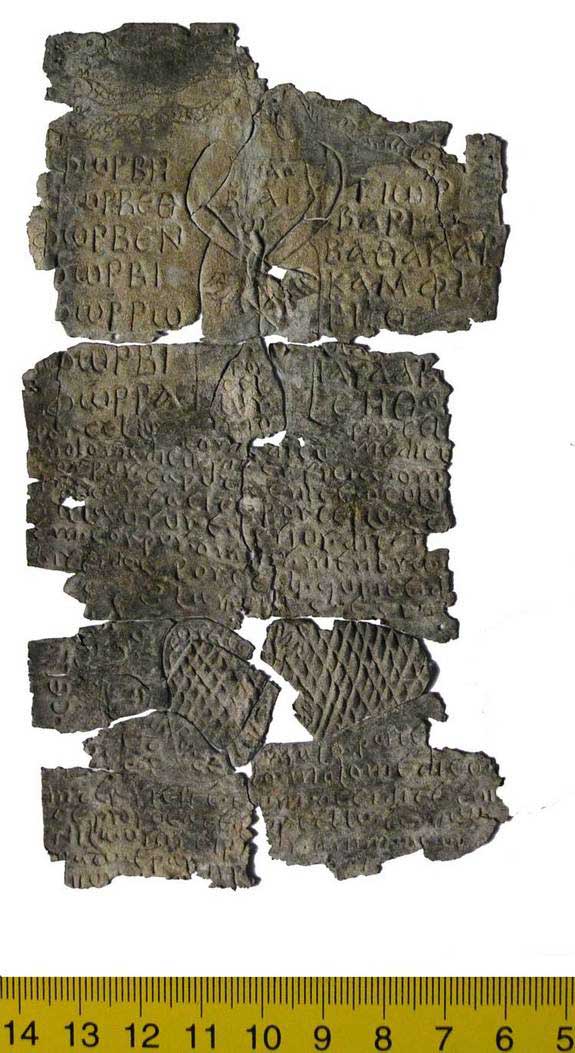 Curses against Senator and… animal doctor

Αt a time when black magic was relatively common, two curses involving snakes were cast, one targeting a senator and the other an animal doctor, says a Spanish researcher who has just deciphered the 1,600-year-old curses.

Both curses feature a depiction of a deity, possibly the Greek goddess Hekate, with serpents coming out of her hair, possibly meant to strike at the victims. Both curses contain Greek invocations similar to examples known to call upon Hekate.

The two curses, mainly written in Latin and inscribed on thin lead tablets, would have been created by two different people late in the life of the Roman Empire. Both tablets were rediscovered in 2009 at the Museo Archeologico Civico di Bologna, in Italy, and were originally acquired by the museum during the late 19th century. Although scholars aren’t sure where the tablets originated, after examining and deciphering the curses, they know who victims of the curses were.

This tablet contains a curse directed at a Roman senator named Fistus, possibly the only known case of a curse targeting a senator. An eight-point star covers the deity’s genitals and snakes project out of its head. The curse is written in Latin with Greek invocations.

One of the curses targets a Roman senator named Fistus and appears to be the only known example of a cursed senator. The other curse targets a veterinarian named Porcello. Ironically, Porcello is the Latin word for pig.

Celia Sánchez Natalías, a doctoral student at the University of Zaragoza, explained that Porcello was probably his real name. “In the world of curse tablets, one of the things that you have to do is to try to identify your victim in a very, very, exact way.”

Sánchez Natalías added that it isn’t certain who cursed Porcello or why. It could be for either personal or professional reasons. “Maybe this person was someone that (had) a horse or an animal killed by Porcello’s medicine,” said Sánchez Natalías.

“Destroy, crush, kill, strangle Porcello and wife Maurilla. Their soul, heart, buttocks, liver …” part of it reads. The iconography on the tablet actually shows a mummified Porcello, his arms crossed (as is the deity) and his name written on both of his arms. The fact that both the deity and Porcello have their arms crossed is important. Sánchez Natalías believes that the spell forced the deity, and thus Porcello, to become bound. “This comparison may be understood in two ways: either ‘just as the deity is bound, so will Porcello be’ or else ‘until Porcello is bound the deity will stay bound,'” she writes in a recent edition of the journal Zeitschrift für Papyrologie und Epigraphik.

“May all his limbs dissolve”…

The case of Fistus, a Roman senator, is also remarkable. The senate in ancient Rome was a place of great wealth and, earlier in Roman history, was a place of considerable power. By the time this curse was written toward the end of the Roman Empire, the influence of the senate had diminished in favor of the emperor, the army and the imperial bureaucracy.

Fistus would still have been a person of some wealth, however, and whoever wrote the curse had it in for him. The Latin expression for “crush” is used at least four times in the curse. “Crush, kill Fistus the senator,” part of the curse reads, “May Fistus dilute, languish, sink and may all his limbs dissolve …”

Again Sánchez Natalías isn’t sure of the motives behind the curse; but whatever they were, even by the standard of modern-day political attack ads, this was a nasty senatorial blow.