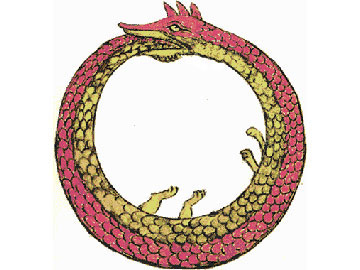 The serpent of eternal life

Symbolic meanings of the snake

The contrast between the Christian and the ancient Greek religion becomes most evident in the different symbolic meaning attached to various things. In order that the “new” religion might not have anything in common with ancient traditions, everything that was, for the ancients, a good thing was assigned to the realm of the forbidden. Such is the case of the dragon and the snake, two symbols that on occasion are interchangeable, were associated with various attributes of Hades, the underworld, the snake, as it does, having its lair in holes beneath the earth. This characteristic of the snake’s being in contact with the underworld is what made it possess terrible powers in the eyes of the ancient Greeks.

The snake, however, is not only endowed with negative powers. Asclepius, the god of Medicine, holds a stick (bakteria) around which a snake is coiled, while the main emblem of the god Hermes is the caduceus, a stick around which two snakes are coiled in the form in which DNA is depicted in our time. It was not long before this symbol became an emblem used for the doctor’s profession. The connection between snake and human health can be explained by the snake’s connection, as we said before, with the underworld and so, correspondingly, with the dead.

Again the serpent is seen as a healing power in the Bible where God commands Moses to make a staff decorated with copper snakes in order that all who had been bitten by a snake might look at it and be cured.

However there is another side to the snake-dragon, this is the destructive side of the bringer of death. This aspect is symbolized in the form of the Lernaean Hydra, the terrible monster with many heads all of them snakes, who was killed by Hercules. The deadly Medusa, with snakes for hair, is another shape in which destructive snakes appear, then there are the huge serpents who annihilated Laocoon and his sons in the epic of the Trojan war.

Furthermore another of the serpent’s characteristics, that of shedding its skin, brought to it the virtue of regeneration in the eyes of human beings.

With the coming of Christianity, however, all this changes. While in antiquity the snake was considered a bearer of health, now it comes to be seen as responsible for man’s mortality, and for his unhappiness brought about by the Fall. Now the Serpent comes to represent the devil, power of evil. It is the shape taken by Envy, one of the seven deadly sins instituted by Pope Gregory the 1st in 540 AD.

The symbolism in the figure of the serpent does not end here. The Alchemists saw in“the Uroborus”, the Snake biting its tail, a symbol of eternal return, of eternal time and eternal life.

Today, years later –now that man destroys his natural environment in order to impose his will on nature rather than live in harmony with it– we have come to consider snakes as important regulators of the natural, biological cycle.

Traditional stories have come down to us of the harmless housesnake (elaphe quatuorlineata) which was thought of as bringing good luck to the home. The housesnake would live in the cellar ( the basement where provisions were stored) and protected the provisions from the onset of mice, cockroaches and all rodents that might lie in wait.