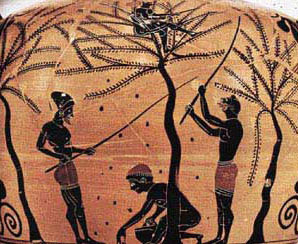 The small black olives that olive paste was made from in antiquity were known as stemphylides. Stemphylon was what olive paste was called in those days. Mixed with vinegar, oil and herbs this became what was known as epityrion, a thick cream eaten with cheese.

To take the bitterness out of olives, the ancients not only used brine (a method well-known to us today), but they also used wine boiled together with vinegar, honey and spices such as fennel, coriander, mint etc.

The cultivation of the vine was brought to the Greeks by the god Dionysus. So we see that the grape came from abroad, from the Eastern coasts of the Black Sea.

Wheat had been grown in Greece already from the Neolithic era. Grains of wheat found in excavations in Thessaly, date back to the fourth millennium (Tsountas 1908). Greek mythology has the goddess Demeter bringing wheat to the Athenians and teaching Triptolemus how to grow it.

According to archaeologists, wheat was first cultivated systematically 10.000 years ago in Syria, Palestine, Jordan and Iraq.

We find wheat and beer, produced from wheat, first mentioned in the Code of Hammurabi (1700 BC).