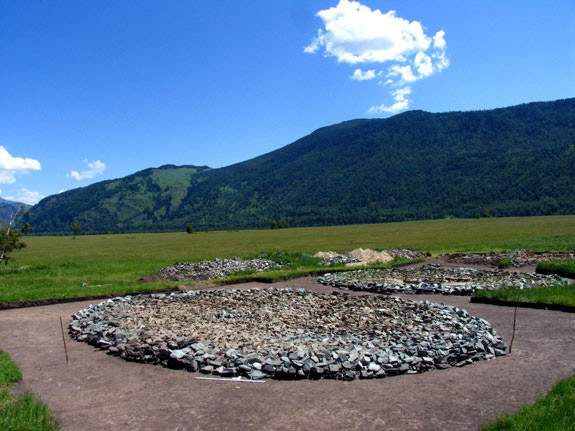 Nomads and Networks: The Ancient Art and Culture of Kazakhstan

Although little is known of the lives of the nomadic tribes, who 2,500 years ago roamed the Asian steppe land in today’s Kazakhstan, the region’s semi-arid climate has provided the perfect temperature and humidity in the ground’s permafrost for the preservation of rare organic artifacts. Richly woven textiles, gorgeous gold-leaf covered wooden horse tack ornaments and other rare organic artifacts, normally not preserved in other areas of the Ancient Near East and Central Asia, have been excavated in burial mounds, or “kurgans”—some more than 100 feet in diameter—that uniformly dot the Kazakhstan landscape, a vast landlocked country, larger than all of western Europe and sharing borders with Russia, China, Kyrgyzstan, Uzbekistan and Turkmenistan.

More than 150 artifacts and works of art excavated from these sites are on display in a new exhibition “Nomads and Networks: The Ancient Art and Culture of Kazakhstan,” which opened at the Smithsonian’s Arthur M. Sackler Gallery on Saturday, August 11. The works represent some of the most significant archaeological discoveries made in Kazakhstan over the past few decades, and the show marks the first time that the ancient visual arts of Kazakh culture have been showcased in a Washington, D.C.-based museum.

Since the tribes moved about the countryside with each change of the season, few physical evidences or traces remain of the culture. No centralized city centers or trade routes could be found or documented. Instead to understand how the nomads lived and died, archeologists mainly rely on the kurgans, where elite members of the society were interred with their goods and even with their horses.

What is beginning to emerge from the excavations is the evidence of a highly sophisticated culture, one that maintained communication networks and strategic migratory routes. But also evidenced is the fact that the Saka people, as the nomadic tribes were called in ancient Persian sources, had a close, almost sacred bond, with their horses. Not an entirely surprising fact, since nomadic cultures throughout the millennia have depended on domesticated animals for both transportation and food. But archeological evidence uncovered from Saka burial mounds indicates that horses were treated as divine beings.

Since the ground’s pervasive layer of permafrost keeps the organic contents of a kurgan at a constant temperature, preventing decay, archaeologist Alexander Nagel, the show’s curator, says that researchers must take extreme measures to protect artifacts during excavation. Oftentimes, entire sections of the excavated site are packaged and removed from the ground intact. The tomb is then transported to a climate-controlled laboratory where researchers carefully examine the kurgan’s contents.

In one unearthed kurgan, a man was interred with a woman—who was presumed to be his mother—in a large sarcophagus, surrounded by 13 horses that were sacrificed for the burial. Three of the horses were decorated to resembled supernatural creatures, and wearing leather masks with wooden horns painstakingly decorated with gold leaf

In life, horses were outfitted with saddles and bridles as extravagantly decorated with ornate gold-laden garb similar to the rich costumes of their riders, often Saka nobility. As for the nobles, gold ornaments were sewn into intricately woven textiles and diadems, golden headbands signifying royal descent, graced the heads of the richest tribe members. Metal shaping tools were used to form incredibly minute and precise details on the golden ornaments, and semi-precious stones such as carnelian and turquoise were carefully applied as accents.

The craftsmanship was appreciated far beyond the borders of today’s Kazakhstan. Carvings sculpted into the palace walls of ancient Persia depict the arrival of foreign Saka delegations to present Persian kings with trade items. On the façade of the Apadana, a fifth century building at Persepolis in southwestern Iran, a carving depicts a procession of Saka people bringing jewelry and other ornaments as tributary to the Persian King.

Horse tack ornaments and jewelry carved from Kazakh trees has surfaced in many archeological finds spanning many territories in Eurasia, suggesting that the Saka people were heavily integrated in the ancient trade network.

Yet as much as researchers can glean from the physical remnants of the ancient nomads, much about their way of life is still shrouded in mystery. Local Kazakh animals, such as red deer, snow leopards, wolves, ravens, ibexes and Bactrian camels are frequently seen in jewelry and small altars made of stone or bronze. In some depictions, snow leopards were given wings, suggesting they might have been deified just as the horned horses were. The ibex appears again and again in ancient artifacts and still today remains a symbol of supernatural power in Kazakhstan.

“Scholars are just beginning to learn more about the rituals practiced by the Nomadic tribes,” Nagel says. “We do know that later on, shamanism was practiced and that it continued into the modern 19th century.”

The exhibition was organized by New York University’s Institute for the Study of the Ancient World. The Sackler’s show includes new landscape photographs by Wayne Eastep, as well as reconstruction drawings. As part of the exhibit, the Sackler has partnered with archeologist Claudia Chang. Chang will be blogging about her experience digging in Tuzusai, Kazakhstan. Nomads and Networks: The Ancient Art and Culture of Kazakhstan is on view through November 12, 2012.