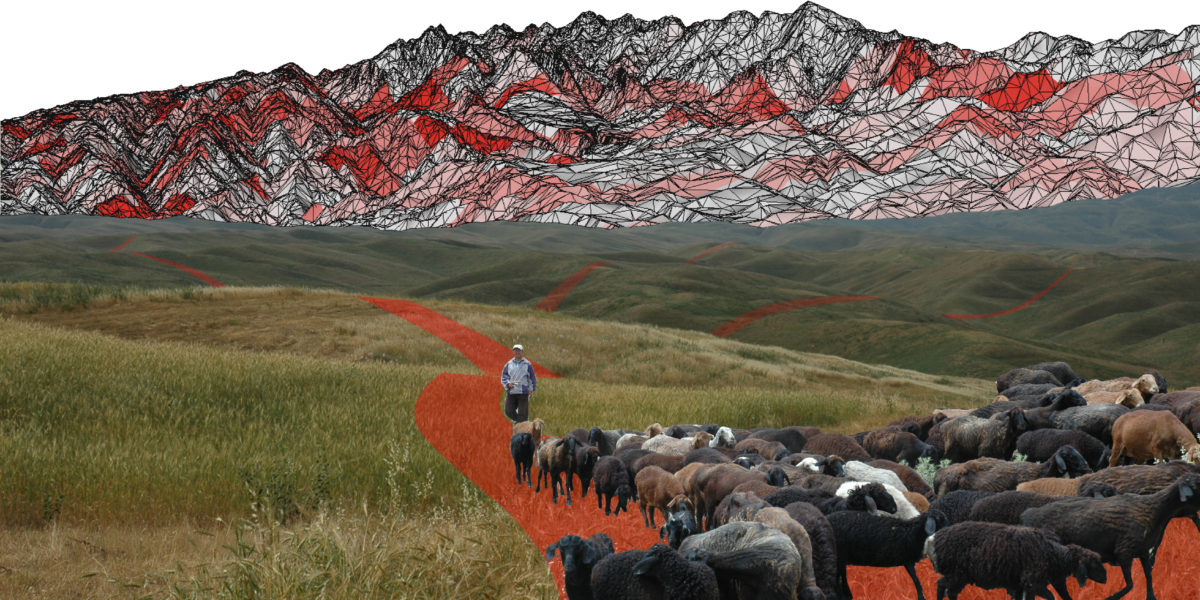 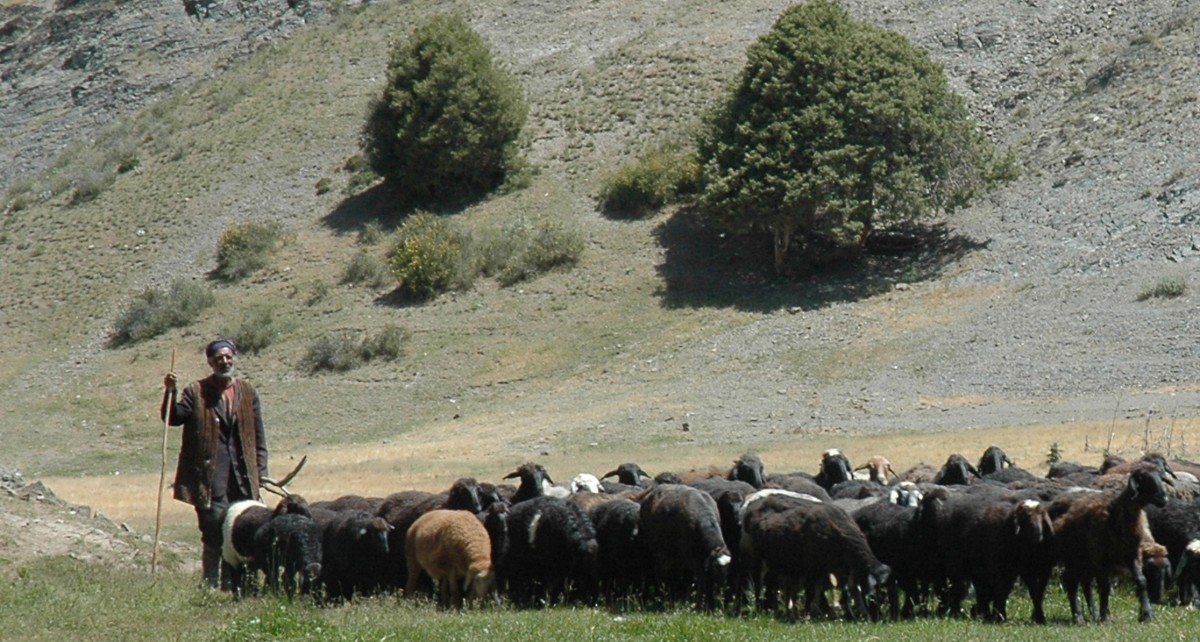 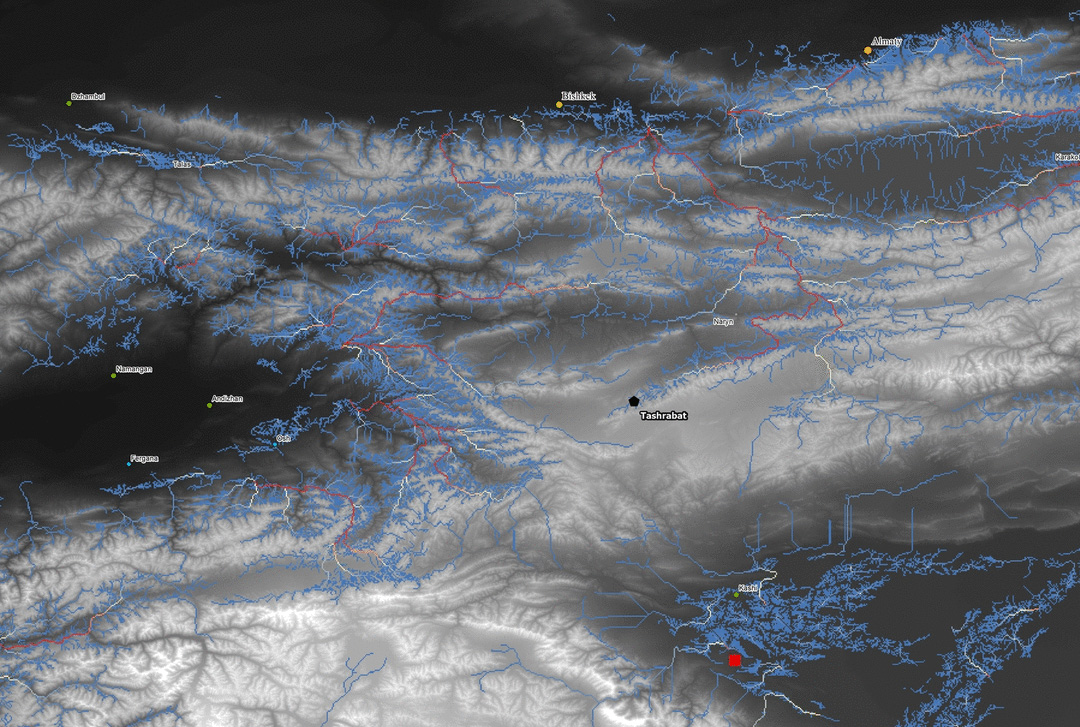 Nearly 5,000 years ago, long before the vast east-west trade routes of the Great Silk Road were traversed by Marco Polo, the foundations for these trans-Asian interaction networks were being carved by nomads moving herds to lush mountain pastures, suggests new research from Washington University in St. Louis.

“Our model shows that long-term strategies of mobility by highland nomadic herders structured enduring routes for seasonal migrations to summer pastures, which correspond significantly with the evolving geography of ‘Silk Road’ interaction across Asia’s mountains,” said Michael Frachetti, lead author of the study and an associate professor of anthropology in Arts & Sciences at Washington University.

The study, forthcoming in the journal Nature, combines satellite analysis, human geography, archaeology and Geographic Information Systems (GIS) to show that 75 percent of ancient Silk Road sites across highland Inner Asia fall along the paths its model simulates as optimal for moving herds to and from prime mountain meadows.

The model’s innovative approach of tracing pasture-driven pathways suggests a number of alternate routes to many known Silk Road sites. It also provides a high-resolution mapping of other possibly important Silk Road routes that are previously unidentified and little researched, including an unexplored corridor into the Tibetan Plateau to the south of Dunhuang, China.

For over a century, the Silk Road —a term coined in 1877 by German explorer Baron von Richthofen— has intrigued modern historians and archaeologists who wish to understand the emergence of what many consider the world’s most complex ancient overland trade system.

“The locations of ancient cities, towns, shrines and caravan stops have long illustrated key points of interaction along this vast network, but defining its many routes has been far more elusive,” Frachetti said. “As a result, there is little known of the detailed pathways used for millennia by merchants, monks and pilgrims to navigate and interact across the highlands of Inner Asia.”

“The routes of Silk Road interaction were never static, and certainly not in the mountains,” Frachetti said. “Caravans traversing Asia were oriented by diverse factors, yet in the mountains their routes likely grew out of historically ingrained pathways of nomads, who were knowledgeable and strategic in mountain mobility.”

“Archaeology documents the development of mountain-herding economies in highland Asia as early as 3000 B.C., and we argue that centuries of ecologically strategic mobility on the part of these herders etched the foundational routes and geography of ancient trans-Asian trade networks,” Frachetti said.

To test this theory, Frachetti and colleagues designed a model that simulates highland herding mobility as “flows” directed by seasonally available meadows. Although the model is generated without using Silk Road sites in its calculations, the pathways it projects show remarkable geographic overlap with known Silk Road locations compiled independently by Tim Williams, a leading Silk Road scholar at the Institute of Archaeology, University College London.

“The development of the Silk Roads through lowland deserts, fertile piedmonts and oases was influenced by many factors. However, the overlay of pasture-driven routes and known Silk Road sites indicate that the highland Silk Roads networks (750 m to 4,000 m) emerged in relation to long-established seasonal mobility patterns used by nomadic herders in the mountains of Inner Asia” said Williams, a co-author of this study. Williams also is author of the International Council on Monuments and Sites (ICOMOS) thematic study of the Silk Roads, which underpinned the UNESCO World Heritage serial transnational nominations.

Frachetti, who directs the Spatial Analysis, Interpretation, and Exploration (SAIE) laboratory at Washington University, has studied nomadic herding cultures and their ancient trade networks around the world. He has led excavations at sites in Uzbekistan, Kazakhstan and other Central Asian countries.

His field work documents that these societies had inter-continental connections spanning thousands of years, a phenomenon he traces to the antiquity of cross-valley pathways that, once engrained, formed the grassroots network that became the Silk Road.

Proving that theory is challenging because the Silk Road’s central corridor runs through some of Inner Asia’s most remote mountain ranges: the Hindu Kush in Northern Afghanistan; the Pamir in Tajikistan; the Dzhungar in Kazakhstan; the Tian Shan in Kyrgyzstan, Kazakhstan and Xinjiang (China); and the Altai Mountains in Kazakhstan, Russia and Mongolia.

His approach relies on the creative application of GIS and Remote Sensing tools normally used to simulate the flow of streams, rivers and other drainage through watersheds. In hydrological applications, “flow accumulation” relies on the known properties of water being pulled to lower elevations by gravity, generating calculations that show how runoff feeds into a network of ever-larger streams and rivers.

Frachetti swaps gravity for grass and uses the flow accumulation algorithm to calculate how the quality of lush pasture might channel flows of seasonally nomadic herders across a massive, 4,000-kilometer-wide cross-section of Asia’s mountainous corridor.

The study area, which spans portions of Iran, India, Russia, Mongolia and China, was divided into a grid of one-kilometer cells, each of which received a numerical rating for grass productivity based on the reflectance of vegetation detected in multi-spectral satellite imagery. GIS software was used to calculate paths highland herders likely followed as pursuit of best-available grazing pulled them toward lowland settlements. The most likely routes were defined as those with the greatest cumulative flow over top pastures.

As Frachetti has found in earlier research, nomads do not wander aimlessly. Pastoralist movement through the mountains is rooted in local knowledge of the landscape and is guided by ecological factors, like the seasonal productivity of grassy meadows. Most confine their migrations to a small regular orbit that is closely repeated from year to year.

His flow model accommodates variation through time in the scale and distribution of prime highland grasslands, but suggests that the broad geography of mountain pasture has not changed drastically over the past several thousand years. Routes oriented for the best grazing would be well known to nomads making similar seasonal migrations over many generations.

Varying the simulated mobility model over 500 iterations (the rough equivalent of 20 generations), well-defined, grass-driven mobility patterns emerged. When the route-building process is shown dynamically, small pasture-based paths appear as rivulets and streams that converge over zones of rich pasture to form rivers of nomadic mobility.

While the study provides broad support for Frachetti’s theories about the early evolution of the Silk Road, it also provides a roadmap for future research aimed at uncovering ancient structures of social participation across the mountains of Central Asia.

It also offers lessons, he suggests, about the importance of participation and connectivity in overcoming the great challenges that continue to confront civilizations.

“This model demonstrates that these rugged mountains were not huge barriers that forced regional communities into isolation, but acted as channels for economic and political forms of participation that supported long-standing connections between neighboring communities,” Frachetti said. “It illustrates that civilization’s greatest accomplishments — evidenced in the amazing scale of Silk Road connectivity — often arise organically in environments where connectivity is the norm; isolation here would be a formula for disaster.”