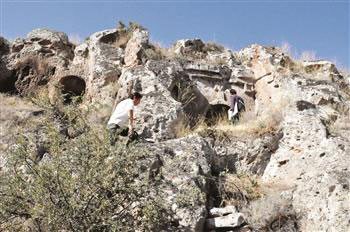 Byzantine Pigeon houses in the Ağırnas Valley in Central Anatolia are the focus of a recent research project carried out by a team of university lecturers and students. The study has started to yield results revealing a number of interesting things about the area.

A study recently carried out at an old Byzantine settlement in the Central Anatolian province of Kayseri’s Ağırnas Valley has revealed that people attached great importance to growing pigeons and that the fertilizer obtained from the rock-carved pigeon houses were used in cereal production.

The valley in the Ağırnas district was launched as a first degree archaeological area in 2005 by Erciyes University, but no excavation works had been carried out there until recently. However, with the permission of the Culture and Tourism Ministry, works have recently initiated in the valley.

A team including Associate Professor Nilay Karakaya and students Savaş Maraşlı, Derya Güneri and Kemal Karaca has made examinations in the area and discovered a number of pigeon houses from the Byzantine era and storages where pigeon fertilizer and cereals produced in the village were stored.

Karakaya said they had been working on the rock settlements and their surroundings in the west of the Koramaz Mountains. “There are three valleys in the western edges of the mountains. These are the Ağırnas Valley, the Derevenk Valley and the Gesi Valley. Our work focuses on the Ağırnas Valley,” she said, adding that they had encountered a number of pigeon houses during their work and discovered that agricultural life was dominant in the northern and eastern parts of the valley.

“[The pigeon houses] really drew our interest, and they have very detailed architectural workmanship.

This is also very interesting. We estimate that there are many religious structures and houses in the area. We originally initiated our work as a two to three year project, but now we think that it will take longer,” Karakaya said.

She also said the team was not able to enter the underground settlements in the valley, and for this reason the study was being carried out entirely on the surface.

She said she had previously worked at the Erdemli Valley in the Yeşilhisar district, which is a famous historical Byzantine settlement, for seven years, but only found a very low number of pigeon houses in the area.

“I suspect that people in Ağırnas used to rely on pigeons. Here [in Ağırnas] there are storages for pigeon fertilizers and cereal depots, and stockbreeding was afforded great importance. It is very interesting to me. When looking at the structures in the west of the valley, I saw that the houses and churches were no different from the ones all over Cappadocia, but the pigeon houses may have some unique regional features. We will see it as we work on it.”