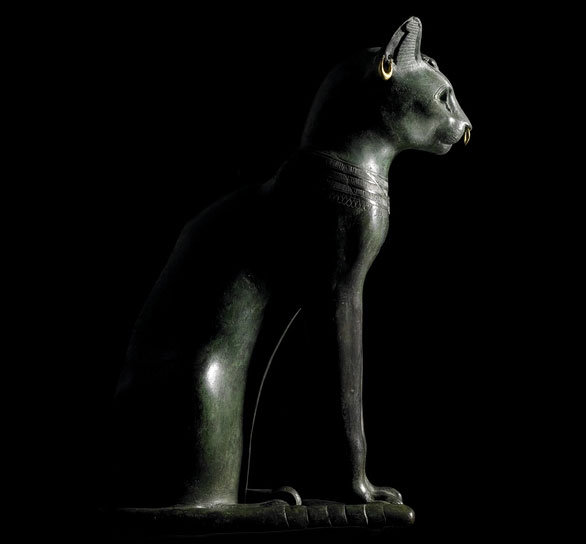 As the exquisite copper alloy figurine of a cat, inlaid with silver and adorned with gold jewellery, was carefully placed in the showcase, we wondered whether pharaonic objects had ever been seen this far north. Not in the UK, but elsewhere? Lerwick, site of the Shetland Museum and Archives lies at 60°15′N, eclipsing St Petersburg, and its Hermitage Museum, but also Helsinki, Uppsala and Bergen.

This collaboration is one of a series of ‘spotlight loans’ of iconic British Museum objects to museums across the UK, supported by the Art Fund. The Shetland Museum opened in 2007, with state of the art security and climate control, combining historic boat sheds with a new building overlooking Hay Dock. Galleries within explore the history and cultures of the islands, alongside space for temporary exhibitions. The British Museum collaborated on the loan of the Lewis Chessmen last year, objects with a clear Scottish history. But why send an Egyptian cat?

The loan allows audiences that might never visit museums with Egyptian collections to appreciate first hand the exquisite quality of ancient Egyptian bronze-working, while also evoking the mysterious nature of Egyptian religion, where gods could be depicted as animals. Schools in England typically teach ancient Egypt, but this is not normally the case in Shetland. The cat’s arrival has prompted some Shetland teachers to introduce the subject, and hundreds of schoolchildren are booked in to see the display in the coming months. And, as in London or Paris (the only cities to have ever seen the cat since it first appeared in Cairo in 1934) many of the visitors I met also professed to an obsession with cats. Ancient Egypt and felines: a potent mix!

But this was no pet. The statue represents a goddess, most likely Bastet, and was probably set up in a temple dedicated to her. As the original base of the figure is lost, we will probably never know who donated the statue to a temple, though the size, quality and precious adornments of this cat suggest it was a wealthy individual, perhaps even a king. In return, the donor might have hoped for a long life, children or a good burial, gifts the goddess could bestow on an individual. More prosaically, the donor would surely have enhanced his or her reputation among their contemporaries.

The display also highlights the work undertaken by museum scientists, which revealed the extensive repairs Gayer-Anderson undertook on the cat.

British Museum objects from ancient Egypt can also currently be seen in two partnership galleries, in Newcastle and Glasgow, while the touring exhibition Pharaoh: King of Egypt, is currently on display in Birmingham.

The Gayer-Anderson Cat is on display at Shetland Museum and Archives until December 9.