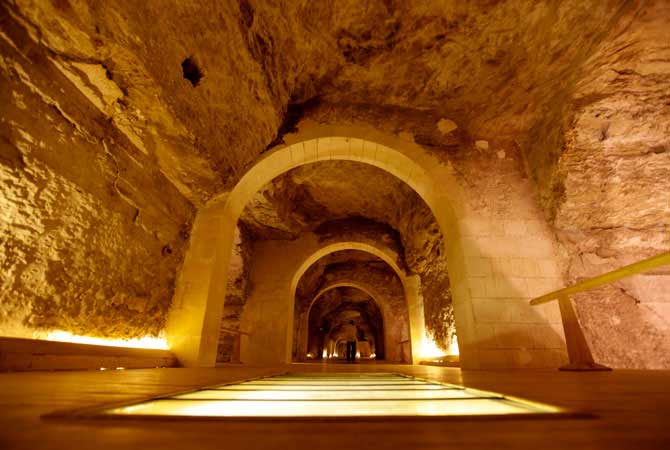 The Apis tombs at Saqqara Necropolis back on tourist map

The salvage operation of the Serapeum is finally completed

Dozens of journalists, photographers and top officials as well as archaeologists and restorers gathered last Thursday at the Saqqara necropolis, almost 25 kilometres far of Giza plateau, to witness the official inauguration of the Serapeum. After almost three decades of debate among engineers, archaeologists and restorers, the well-known Apis tombs at Saqqara necropolis known as the Serapeam have finally been restored. The tombs of Ptahhotep and Mereruka, two Old Kingdom noblemen, were also inaugurated after restoration.

The Serapeum is one of the main tourist attractions in Saqqara, discovered by archaeologist August Mariette in three stages in 1851-1854, during his business trip to Egypt to document and list Coptic manuscripts in monasteries. While waiting for permission from the Patriarch of the Coptic Church, Minister of State for Antiquities (MSA) Mohamed Ibrahim recounted to reporters, Mariette went on an exploratory trip to discover Egypt’s monuments and archaeological sites. During his trip, he found several engravings bearing the name of Osiris Apis and, asked about that name, archaeologists told him that it was the god of Saqqara. Mariette then went to Saqqara, where he discovered the Apis bull tombs and called them the Serapeum, a name used by French historian Strabon referring to Serapis. From 1851 and 1854 Mariette managed to discover the two parts of the Serapeum: the vaults including the tombs of Apis bulls from the 18th to the 26th dynasties (still under restoration); and the great Serapeum which has now been restored, consisting of a long corridor lined with 24 Apis bull vaulted tombs with granite sarcophagi.

Ibrahim described the inauguration of the Serapeum as “a starting point” for a series of forthcoming inaugurations of several monuments and archaeological sites in Egypt, such as a collection of noblemen’s tombs on the Giza plateau and the Hibis temple in the New Valley, to mention but two. “The Ministry of State for Antiquities was keen to inaugurate such sites before the start of Egypt’s tourism season in order to open up new tourist attractions and to send the message that Egypt is safe and exerts all efforts to preserve its archaeological heritage,” Ibrahim announced during a press conference held today noon at Saqqara. He called on people everywhere to come to Egypt and visit its unique archaeological sites.

Mohamed El-Sheikha, head of projects at the MSA, said the actual restoration work started in 2001 and was finished in 2011. It includes consolidating the walls and ceilings of the Apis tombs and corridors, of which some sections were partially deteriorated. Steel scaffolding was also installed to maintain the Serapeum’s vaulted ceilings which were threatened with collapse. The limestone floor of the Serapeum corridors was covered with wooden plaques in order to facilitate roaming around its different sections while at the same time preserving its original ground floor, which can be seen through small windows of glass along the entire length of it.

Hussein Fahmi, the Cairo University engineering professor who made the restoration plan of the Serapeum, said negotiations for restoring the Serapeum started as early as the 1985 when it was noticed that arts of it were damage and wooden scaffoldings were erected until a more lasting concrete solution to the problem was found. During that time the simple vaults of the Serapeum were rediscovered and a ferocious debate took place among engineers on the one hand and archaeologists and restorers on the other on whether to install iron scaffolding and pillars inside the vaulted tombs to support the ceilings, which were threatened with collapse. Finally, Fahmi said, after more than three decades and three visits by the UNESCO team, the restoration plan was approved and work started in 2001. It took another ten years of restoration for the Apis bull tombs to come back to Egypt’s tourist map.

On the northern side of King Teti I’s Pyramid stands the mastaba tomb of Mereruka, king Teti’s vizier and chief justice minister. His tomb represents Saqqara’s largest nobleman’s tomb, illustrating his exalted position during the reign of Sixth Dynasty king.This tomb was discovered in 1892 by French Egyptologist Jaques de Morgan. It bears excellent ancient Egyptian reliefs showing different aspects of Old Kingdom life and customs. The tomb held the remains of Mereruka, his wife Seshseshet and their son Meriteti.Ibrahim said that the tomb’s walls were intricately decorated with scenes depicting Mereruka in different poses with deities and family members, and during his frequent hunting and fishing trips. Among the most striking reliefs is one portraying a hippopotamus hunt and fowling expeditions in the marsh-lands.Old Kingdom crafts and industry are also depicted, including scenes showing carpenters, sculptors, vase-makers, metal-workers and jewellers at work.

The tomb of Petahotep, city administrator and vizier of the Fifth Dynasty King Dkedkare Isesi, is the third tomb to be opened in the Saqqara Necropolis since it was discovered in 1850 by Mariette. This tomb was documented by Norman de Garis Davies at the beginning of last century.The tomb also houses the burial chambers of Petahotep and his father Akhethotep. It bears outstanding reliefs depicting both viziers in different positions with attendant family members and deities.Rich with original scenes, the tomb combines the precision of attentive observation with that of remarkable craftsmanship. It consists of an entrance with a two-pillar portico, which leads to a corridor decorated with paintings depicting agricultural activities presided over by Akhethotep and his son Petahotep.