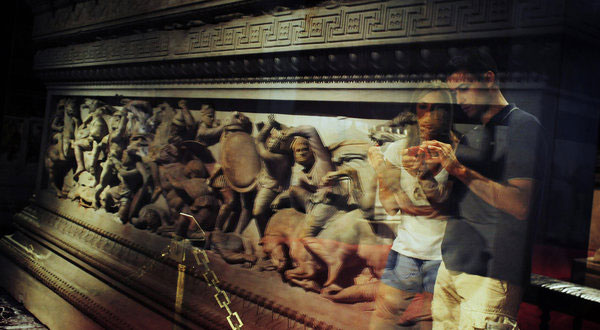 “The Turks are engaging in polemics and nasty politics,” said Hermann Parzinger

An aggressive campaign by Turkey to reclaim antiquities it says were looted has led in recent months to the return of an ancient sphinx and many golden treasures from the region’s rich past. But it has also drawn condemnation from some of the world’s largest museums, which call the campaign cultural blackmail.

In their latest salvo, Turkish officials this summer filed a criminal complaint in the Turkish court system seeking an investigation into what they say was the illegal excavation of 18 objects that are now in the Metropolitan Museum of Art’s Norbert Schimmel collection.

“We know 100 percent that these objects at the Met are from Anatolia,” the Turkish region known for its ancient ruins, Mr. Suslu, an archaeologist, said in an interview. “We only want back what is rightfully ours.”

Turkey’s efforts have spurred an international debate about who owns antiquities after centuries of shifting borders. Museums like the Met, the Getty, the Louvre and the Pergamon in Berlin say their mission to display global art treasures is under siege from Turkey’s tactics.

Museum directors say the repatriation drive seeks to alter accepted practices, like a widely embraced Unesco convention that lets museums acquire objects that were outside their countries of origin before 1970. Although Turkey ratified the convention in 1981, it is now citing a 1906 Ottoman-era law — one that banned the export of artifacts — to claim any object removed after that date as its own.

Thievery and looting are wrong, Turkey says, no matter when they occurred. “Artifacts, just like people, animals or plants, have souls and historical memories,” said Turkey’s culture minister, Ertugrul Gunay. “When they are repatriated to their countries, the balance of nature will be restored.”

Turkey is not alone in demanding the return of artifacts removed from its borders; Egypt and Greece have made similar demands of museums, and Italy persuaded the Met to return an ancient bowl known as the Euphronios krater in 2006.

But Turkey’s aggressive tactics, which come as the country has been asserting itself politically in the Middle East in the wake of the Arab Spring, have particularly alarmed museums. Officials here are refusing to lend treasures, delaying the licensing of archaeological excavations and publicly shaming museums.

“The Turks are engaging in polemics and nasty politics,” said Hermann Parzinger, president of the Prussian Cultural Heritage Foundation, which oversees the Pergamon. “They should be careful about making moral claims when their museums are full of looted treasures” acquired, he said, by the Ottomans in their centuries ruling parts of the Middle East and southeast Europe.

One example is a prized sarcophagus named for Alexander the Great, discovered in Sidon, Lebanon, in 1887, and now in Istanbul’s Archaeological Museum. Mr. Suslu said the sarcophagus was legally Turkey’s because it had been excavated on territory that belonged to Turkey at the time.

Turkey’s campaign has enjoyed notable success, however. Last year the Pergamon agreed to return a 3,000-year-old sphinx from the Hittite Empire that Turkey said had been taken to Germany for restoration in 1917. German officials said Turkey had threatened to block major archaeological projects if the sphinx did not come home.

But even after it had, the Germans complained, Turkey still declined to collaborate and refused to lend four objects for a current exhibition. Mr. Suslu indicated that the Pergamon had to return other disputed items before loans would resume.

Mr. Parzinger said Turkey had no legal claim to the contested objects it says his museum has illegally, and that treating Germany like a petty thief puts more than a century of archaeological cooperation at risk and harms relations between the countries as Turkey seeks to join the European Union. He pointed out that Westerners had been at the forefront of safeguarding Turkey’s rich history.

“If all Westerners are just thieves and robbers,” he asked, “then who has been restoring their cultural heritage?”

In another victory for Turkey, last month the University of Pennsylvania’s Museum of Archaeology and Anthropology announced that it had agreed to lend indefinitely 24 artifacts to Turkey from ancient Troy whose murky provenance helped inspire the 1970 Unesco convention. Turkey, in turn, promised future loans and collaboration with the university.

Some museum directors said that they feared that the surrender of the objects by the university, which acquired them in 1966, threatened to lead to a flood of further claims.

In September 2011, the Museum of Fine Arts, Boston, returned the top half of an 1,800-year-old statue, “Weary Herakles,” which the Turkish prime minister, Recep Tayyip Erdogan, triumphantly took home on his government jet.

To press the Met for documentation on the Schimmel objects, Turkish officials said they had refused to lend to a Met exhibition that ran this year, “Byzantium and Islam: Age of Transition.”

The Met denied it had asked Turkey for pieces for the show. Its director, Thomas P. Campbell, said in an interview that the Met believed the objects sought by Turkey had been legally acquired by Norbert Schimmel in the European antiquities market in the 1960s before being donated to the museum in 1989, and thus were in compliance with the Unesco accord.

He acknowledged that most of the objects had no documented ownership history, but also said that there was no evidence of an illicit excavation. Turkish officials said they had not yet uncovered evidence proving that the objects had been illegally smuggled out.

“If evidence emerges that the objects were illegally excavated or looted, we will address that on a case-by-case basis,” Mr. Campbell said.

Mr. Campbell said the argument that objects should always be returned to their countries of origin was dubious, given that many artifacts had traveled throughout the centuries. “We are in the business of celebrating Turkish culture,” he said, “and it is the great displays in London, Paris and New York, more than anything else, that will encourage people to go to Turkey and explore their cultural heritage, and not just the sun and beach.”

Marc Masurovsky, an expert on plundered art at the Holocaust Memorial Museum in Washington, said it was no surprise that in the absence of an international agency to enforce anti-plunder measures, the Turks were resorting to hard-nosed diplomacy. But Turkey faces hurdles trying to apply an Ottoman law outside its borders, he noted. And even if that law is accepted as applicable, dating the illegal excavation of any site is difficult because no records are typically kept.

Still, Mr. Suslu said nothing justified theft, and he pointed to the Louvre’s possession of late-16th-century Iznik tiles that had been stolen, he said, by the French restorer Albert Sorlin-Dorigny in the 1880s. The tiles, from the mausoleum of Sultan Selim II in Istanbul, were taken to Paris for repair, but he said Sorlin-Dorigny gave them to the Louvre in 1895 instead of returning them.

The Louvre did not respond to messages seeking comment. Turkish officials said that the French insist that the tiles were given to Sorlin-Dorigny by a member of the royal family, but that they did not offer any documentary proof.

“Who in his right mind would give a present from his own relative’s tomb to a foreign country?” Mr. Suslu asked. “If you come to my house and you steal precious objects from me, do I not have a right to get them back?”