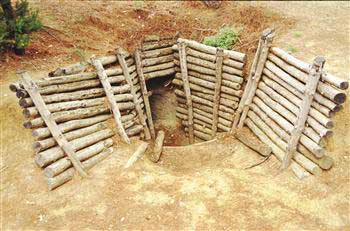 constructed during the Battle of the Dardanelles

A joint archaeological research project initiated by Turkey, Australia and New Zealand in 2010 is working to map the locations of shelters constructed during the Battle of the Dardanelles. Turkish and Anzac archives have been used in the project, as well as GPS technology.

A joint archaeological project carried out by Turkey, Australia and New Zealand in Gelibolu Peninsula Historical National Park is working to map the locations of shelters built during the Battle of the Dardanelles in 1915, using information from both Turkish and Anzac archives.

The governments of the three countries began work on the joint historical and archaeological project at the Arıburnu battlefield in 2010, said Professor Mithat Atabay, director of the Atatürk and Dardanelles Wars Research Center (AÇASAM) at Çanakkale’s Onsekiz Mart University (ÇOMÜ). This year a research group including nine Australians, six Turks, and one New Zealander gathered Sept. 5 through 28 to continue work on the mapping project.

“We met with Turkish and foreign scientists at ÇOMÜ in October 2009, and reached an agreement for the joint project between the three countries. With the permission of the Culture and Tourism Ministry’s Cultural Artifacts and Museums Directorate, we decided to work in an area mentioned in article 129 of the Lausanne Agreement. We gathered to work for the first time between Oct. 15 and 30, 2010, and then again between Sept. 12 and 27, 2011,” Atabay said.

This year’s research was carried out at the Lone Pine, Mehmet Çavuş, Cesarettepe and Keskinsırt battlefields, Atabay said. “We first worked to determine the locations of the shelters. Then we mapped the shelters, barricades and bunkers in the fields using a DGPS [differential global positioning system]. Maps showing the shelters from the time of the battle were used in the research. We were able to determine the exact locations of the shelters with the help of both Turkish and Anzac archives. The DGPS system gives us all the details of the area within a 15-centimeter margin of error. We also used geophysical methods this year, and found a number of tunnels and drains in the fields, as well as the grave of 47th Regiment commander Tevfik Bey.”

The project has drawn worldwide interest, Atabay said, and the editor of U.S.-based Archaeology Magazine, Samir Patel, came to Turkey to see the work in progress. “The research will be published as the main subject of the magazine’s next edition,” Atabay said, adding that the results of the research will also be published as a book in 2015 by Cambridge University Press.

The project’s mapping work at Gelibolu will continue next year.