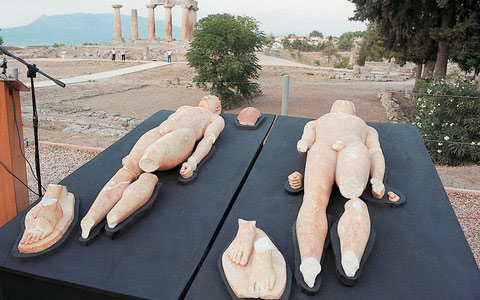 The secret of the two Kouroi

Soon to be exhibited

Surveys have shown that the two Kouroi of Corinth have been erected in honor of two 35- year-old men which died at the same time and were buried simultaneously. Soon the two statues will be exhibited in the Archaeological Museum of Ancient Corinth.

The town Corinth is waiting for the upcoming exhibition of the Kouroi in its archaeological museum. The exhibition of the two statues “makes sure that the Kouroi will be seen not as looting objects and isolated museum exhibits, but as works of art presented in close correlation to the other excavation finds, like the limestone sarcophagus of the two men”, as Konstantinos Kissas, Head of the LZ’ Ephorate of Prehistoric and Classical Antiquities of Corinth, pointed out in a lecture given at the American School of Classical Studies.

Mr. Kissas presented the finds of recent excavation sessions from the whole area, and referred extensively on the upcoming exhibition of these unique statues. He said that “the Kouroi of Klenia will be exhibited in the eastern wing of the Archaeological Museum of Ancient Corinth, which until now has been used for the storage of finds from the excavations conducted by the American Schools of Classical Studies in Corinth”.

Mr. Kissas mentioned that according to the dental analysis the two men were buried at the same time and were 35 years old.

Feneos was lying at the northwestern foot of the plateau. In its acropolis parts of the ancient walls had been located in the past, reaching at 2-2,5 m. height at some points.

“The land clearing has brought to light a strong wall, 3,20 m. in width, which extends along the northern side of the acropolis, and has a total length of 220 m.”, according to Mr. Kissas. “During the cleaning works, four semicircular towers were revealed, attached to the wall, of a 5,5 m. diameter. Their curtain length varies from 45-60 m., while their projection from the wall reaches 2,90 m. The best preserved tower, 4,5 m. in height, is in the middle of the northern wall of the acropolis. Its original height would exceed 6 meters”.

2011 was the start of a 5-year research cooperative program of the competent Ephorate of Antiquities and the Archaeology and History Department of Karl Franzens University of Graz (Austria), supervised by the Austrian Archaeological Institute in Athens. The excavations did not reveal important finds. “It turned out that the fortification of the acropolis was lying further to the East. (…) The wall of ancient Feneos can now be dated to the second half of the 4th century BC (…)”. In ancient Corinth one of the most interesting finds was a “workshop of clay refinement for pottery production, but probably also a workshop of mud bricks. According to the results of the surveys, in the northern plateaus of ancient Corinth an organized and dense settlement had been developed, which flourished during the 13th century BC”.