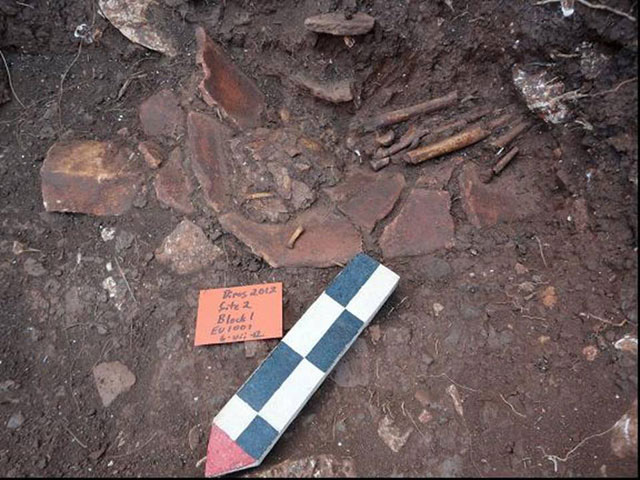 Reproduction of the paleo-environment of western Mani after the Pleistocene period and its interaction with man, the realization of a systematic surface study of the environs of the Bay of Diros and the study and publication of the archaeological material unearthed were the three targets of the research programme “Diros excavation and research project” that was completed over the summer.

The Alepotrypa (Foxhole) Cave, the exploration of which began in 1970, was inhabited during the Neolithic Period (6000-3000BC) and has produced thousands of finds of clay, stone and bone tools, jewelry and human and animal bones.amna

The 2012 studies began with a geoscopic study in the area of Xagounaki (Neolithic acropolis of Diros) at the northern entrance of the Alepotrypa Cave. This area gave up a heavy concentration of stone tools, shells and human bones from the Late Neolithic Period.

Excavations also turned up an undisturbed double child burial in an urn, sections of another burial from the Final Neolithic Period and three adult burials, also undisturbed. The concentration of the more than 160 burials found to date, combined with the large quantity of pottery and tool finds, lead to the conclusion that the area was heavily occupied during the Final Neolithic Period.

Noteworthy is the full absence of finds after the Neolithic Period, which indicates that the Cave and its surrounding area were not used after that period for systematic habitation.