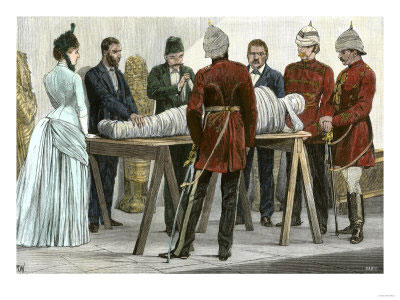 The first mummy studies began in the early 19th century. The mummies examined were almost always those brought back as souvenirs from wealthy tourists’ travels in Egypt. There were “mummy unwrapping parties”, where otherwise sanctimonious Victorians felt no qualms desecrating pre-Christian bodies and even sent specially-printed invitation cards: “Lord Londesborough at Home: A Mummy from Thebes to be unrolled at half-past Two”.

Later on, public “unwrappings” of real mummified human remains either by showmen or scientists not only heightened the general fascination about mummies, which have been objects of horror on public culture since the early 1800s, but also contributed to the development of the growing science of Egyptology, says Dr. Kathleen Sheppard, an expert in the history of science and assistant professor of history and political science at Missouri University of Science and Technology.

Sheppard’s article about this intersection between science and showmanship, entitled “Between Spectacle and Science: Margaret Murray and the Tomb of the Two Brothers” will be published in December in the journal Science in Context.

Margaret Murray was an Egyptologist and the first woman to publicly unwrap a mummy. She sought to discover the mysteries of ancient Egypt by exposing mummified human remains. Public spectacles where mummified remains were shown as objects of curiosity date back to the 16th century. “These types of spectacles were highly engaging shows in which people were, to a certain degree, educated about different aspects of science both by showmen and scientists,” says Sheppard.

Unlike other Egyptologists who drew a distinction between “Egyptomania” and “Egyptology”, in other words between the fascination with everything Egyptian and the scientific study of Egyptian civilization, Murray wanted to involve the public in scientific research and enlighten people, by showing them that mummies weren’t magical but human remains to be studied and learned from.