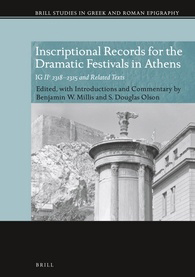 IG II2 2318–2325 represent the most substantial surviving body of evidence for the institutional history of the Athenian dramatic festivals from their establishment at the end of the 6th century BCE to their disappearance sometime in the mid- to late 100s. Millis and Olson offer a completely updated text of the inscriptions, based on a close study of the stones themselves; detailed explanations of the restorations of the dimensions and organization of the original records, with numerous redatings and the like; and new — and in some cases radically different — reconstructions of the monuments on which they were inscribed. The volume also includes substantial interpretative essays on each set of records, a full epigraphic and prosopographic commentary, and several indices.

Benjamin W. Millis, Ph.D. (2001) in Classical Philology, University of Illinois, Urbana-Champaign, is Research Associate at the University of Oxford. He has published widely on the history and epigraphy of ancient Corinth.