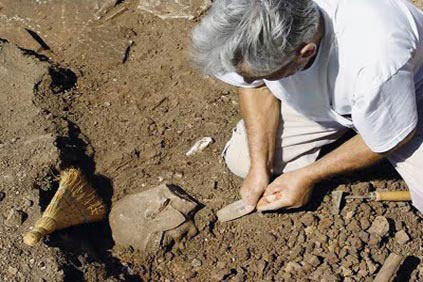 The field season 2012 at the site of Vlou, located 2,5 km northeast of the village Anogyra of Lemessos district, has been completed. The excavations were conducted by the Institute for the Institute for the History of Material Culture – Russian Academy of Science under the direction of Dr. V.A. Goroncharovskiy.

The site was probably part of a small rural sanctuary (late 2nd-4th centuries AD). During previous field seasons (2009-2010) part of a big room, a courtyard with three levels, four service rooms and a small building with two rooms at the eastern part of the site were revealed. This year’s surveys brought to light a new complex of rooms at the northeastern part of the sanctuary. This discovery changed the interpretation of previous finds at the site. The remains of an olive oil production workshop, which had been destroyed by an earthquake at the end of the Hellenistic period are still being investigated. This workshop was located at the lowest part of the cellar of the building. Opposite from the big vertical stone of the oil-press a big cutting (0,9 meters depth) and a stone weight were found.

Five rooms of the building have also been investigated. One of these was probably used as a stockyard for donkeys or mules. At the cornerstone holes were found which might have been used for tethering the animals. Among the finds in the rest of the rooms is a rectangular stone with the engraving of the letter “A”, a bronze needle with a rounded head and two bronze coins of Contantius II (337-361AD). These finds confirm that the sanctuary was in use until 365 AD, when a strong earthquake destroyed the neighboring Kourion.